In recent years there has been a small flurry of discoveries of ice age elephants in New York State. You may well have read about the mastodon discovered in Hyde Park; it made quite a stir down there. The bones were found quite by accident in a small pond in the family’s backyard. All they had wanted was to enlarge that pond, what they got was an ice age treasure. Researchers spent the summer of the year 2000 excavating the skeleton and most of it was recovered. Such events are very exciting and people come from all over to see the bones as they emerge from the muds. Some even got involved in the project, there is never a shortage of local volunteers to help out in this sort of dig. 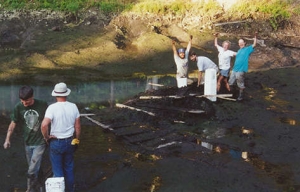 Less well known was a similar discovery near Ithaca, the year before. Another swampy area yielded the bones of an ice age elephant. This one were parts of a woolly mammoth, and this dig attracted dozens of Cornell students. A big surprise awaited them when, during the excavation, the remains of a second skeleton, this one being another mastodon, came to light. You can imagine the excitement that accompanied this “twofer.”

Such discoveries are always big news stories in the local area. They should be; they are rare and exciting events. But, during the eighteenth and nineteenth centuries very many more such discoveries were made. In those times it was common for farmers to drain their swamplands and this frequently led to the discovery of large bones. The Hudson Valley of New York State became something of a world capital for mastodons, as these relatives of the modern elephant were apparently very common here, especially in Orange County in the lower Hudson Valley. 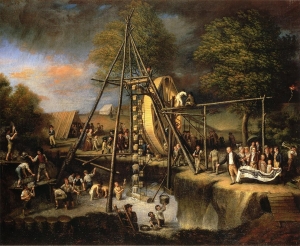 The hunting has not been nearly as good in the upper Hudson Valley, but some very historic finds have been made there. What may surprise you, as it did us, is that Columbia County was the very first place where a mastodon was ever found.  This story takes us all the way back to the year 1705. That’s when a mastodon tooth was found by a Dutch tenant farmer in what was then called Claverack Manor, which may well be Greenport today. Spring floods washed it out of a bluff, about 60 feet above the Hudson River. The remains were fragmentary, but they impressed the English colonists of the time. The big find was a tooth that weighed five pounds.

Today, such a tooth would be quickly identified as belonging to a mastodon, but back then nobody knew of such animals. There was great debate over just exactly what kind of creature had possessed such a large tooth. Lord Cornbury, then the English governor of New York, pronounced it to be from a human giant. His interpretation was greatly influenced by his religion. Genesis stated that there “were giants on the Earth in those days” and Cornbury thought this had been one of them. He sent people to search the site again and soon a fair number of very decayed bone fragments were discovered to go with the tooth. The corpse appeared to have been 30 feet long. A single thigh bone seemed to measure 17 feet. Those numbers were badly in error.

There were others who thought that the remains must belong some sort of animal or even a fish, but they could not tell just what kind. Congregationalist minister Edward Taylor was the first to suggest that the animal had been an elephant. But what kind of elephant? Back in the early 1700s nobody understood the concept of extinction and so nobody was going to suggest that the Claverack Giant was anything other than a modern form and there are, of course, no living wild elephants in New York State

Edward Taylor had other ideas however. He thought that there might have been some thoroughly un-Christian giants. He cited Indian legends of ancient human giants. They had been as tall as trees and hunted bears. But, to profess pagan Indian myths was not wise in eighteenth century New England, and these views were best kept to himself.

In 1706 some more mastodon remains were found and these were shown to Massachusetts Governor Dudley. He thought that they were the eyeteeth of a human, and he added the notion that the specimen had been a victim of Noah’s great deluge! His acquaintance, the influential Puritan Cotton Mather, of Witch Trial fame, embraced this notion enthusiastically. Despite his association with witch trials, Mather was something of a naturalist and, in his theology, he sought to focus on scientific rationalism. He saw the Claverack giant as empirical proof of the Biblical story that there had been giants living in the pre Deluge Earth.

It is true that there are some resemblances between the human molar and the mastodon’s tooth and, back then, little was known of fossil elephants, but Dudley’s opinion is still just a little hard to understand. As the decades passed, other mastodons were found from time to time.

Dudley’s speculations had long faded into history by 1838 when parts of another mastodon were found across the Hudson River in Greenville. This was, at the time, considered an important discovery. New York’s famous paleontologist, James Hall, brought along the even more famous English geologist, Charles Lyell, to visit the site in 1841.

It wasn’t long before another mastodon turned up in Greenville. A partial skeleton was found somewhere along Rte. 32, maybe about a mile south of Greenville. This was within a “small swampy depression” on the farm of Charles Coonley. It is not clear exactly what was found here and the bones seem to have become scattered, but it appears that a number of bones, perhaps from several elephants, came to light. This was long before careful excavations were done and so this discovery will probably never be well understood.

A few more Hudson Valley mastodons would come to light during the next 160 years, and we still think that there are more waiting to be found. These discoveries have been made mostly in the sediments of old glacial lakes and there were a lot of those in the Hudson Valley, in fact most of the valley was once a single great glacial lake, called Lake Albany.

After the Ice Age ended, those lakes generally drained, and a large number of pools and wetlands were left behind. If you travel around the Hudson Valley area you will see these in abundance. Some of those wetlands have been dammed to create artificial ponds, but many of the pools and all of the swamps are natural.

As the glaciers melted, forests gradually invaded our vicinity. The forests attracted mastodons. These animals fed on the vegetation and apparently enjoyed living among the trees. Mastodon teeth seem adapted for gnawing such foliage. Mammoths, on the other hand, were apparently better fitted for life on the bleak and barren tundras. They would have avoided forests. The whole post ice age Hudson valley was forested and populated by many mastodons but probably no mammoths.

We must do a lot of speculation as we consider the skeletons that have been found. The typical fossil mastodon is a young bull. Young males of most species are reckless and foolish so it is so easy to imagine many of them wandering out into small ponds in a quest for pond weeds. The sticky muds at the bottoms of these ponds seem to have trapped many of these poor creatures Elephants are bright animals, but they don’t rescue each other. Getting stuck would have led to a likely death and eventual preservation as a fossil skeleton in the pond sediments. As the millennia passed, the ponds turned into swamps and, in time, some of the skeletons were discovered. People dredged their swamps with the purpose of creating farm ponds and encountered the sleeping giants of long ago. 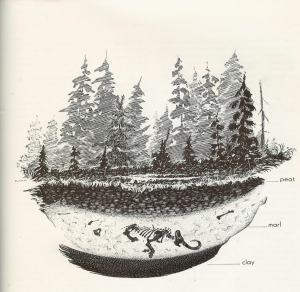 What we find so interesting about all this is that everything we know about this tells us that there are still a lot of undiscovered mastodon skeletons around here. Any swamp or pool of water is a potential hiding place for a mastodon, and there are a lot of swamps and pools.  And make no mistake about it, a lot of mastodons died in a lot of those old ponds. They are still there to be found.

Finding a mastodon is not easy, it requires luck, but it also requires that people know what to look for. Typically, somebody needs to make an excavation and that work cuts into the old muds. Large bones are found, but too often people dismiss them as being cow or horse in origin. It’s often the case that the significance of such discoveries is only understood when the tusks of the mastodon are found. It’s pretty hard to confuse tusks with the remains of a cow!

So, what we are saying is that if you have seen some large bones in a local excavation, it is time to take another look, you might have found the bones of an ice age mastodon and that should be known about. Good skeletons are worth a lot of money too. We are told that a complete skeleton is worth about $50,000. We are also told that it costs a lot to properly excavate one: you guessed it, about $50,000.

If you want to learn more about the history of American fossil mastodons, please read the book “American Monster” by Paul Semonin.