Top of the falls, bottom of the river

Kaaterskill Falls is one of the scenic centerpieces of the Catskills. To stand atop these falls and to gaze out at the gorge below is a grand Catskills experience. The stream which makes the falls can, at times, be a powerful flow. This is the creek that drains North and South Lakes so it witnesses a lot of water flowing by. Sometimes it is a thunderous and very loud flow that tumbles over the falls. That adds to the experience. People have been coming here for almost two centuries now. Many have left the names or initials carved in the rocks here. The oldest inscription in the rocks that I have seen carries the date of 1810. Thomas Cole did some of his early work here. 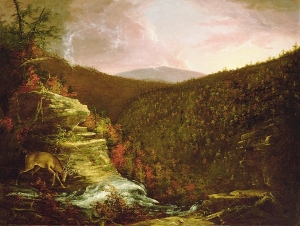 But I am a geologist and when I am at the top of the falls, which is often, I see inscriptions that Nature herself has left here. And these are a lot older, hundreds of millions of years older. I know how to read those inscriptions even though they are not in English.  And when I read the rocks I see into them. I see not just one stream here but two. And both of those streams are flowing in the same direction and their two channels are almost identical in size. Left banks match left banks; right banks match right banks. But that second stream is as old as the rocks themselves, perhaps 375 million years old. You might dismiss my observations as tainted by hallucinations but I am quite literal in what I report to you. There are two streams there. Let me explain.

If you visit the top of Kaaterskill Falls please notice the rock ledge that rises above the modern flow of water. Notice the stratification within those rocks. Beds of sandstone lay there, all of them inclined in the direction of the falls. These sandstone beds and their patterns of stratification make what is called planar cross bedding. That is a sedimentary feature which we associate with the channels of rivers. Essentially, these strata were part of a sand dune which formed within the channel of the old stream and grew with time as it also migrated down the stream. 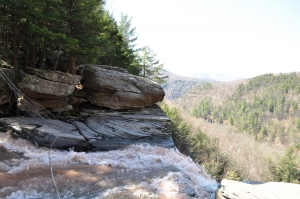 Aha! Now you too can see my second stream; it is composed of rock. Planar cross stratification occurs when powerful river currents are sweeping sand along in a downstream direction. As long as the current stays strong the sand will continue on its journey. But, just as the current is starting to slow down which has to occur eventually, then deposition begins. The sand slows down too and that dune begins to form and then it grows one stratum at a time. That growth continues the dunes migration as it is now growing in a downstream direction. Look carefully and that is what you can see here. Those strata of rock are inclined to the right which is roughly to the southwest. That’s the direction that the old stream was flowing. And, it is also roughly the direction that the modern stream is flowing.

What happened to that sand and its dune is that it finally stopped advancing downstream and never moved again. The stream was probably diverted to a new path, rivers do that. Then, with time, the sands came to be buried under so much more sediment that they were hardened into rocks. This became a petrified dune in a petrified streambed.

And so it is that I really do see two streams here. One is modern, the other is very ancient. Both display the same direction of flow, to the southwest. It is so odd to see two streams, so similar to each other but separately by hundreds of millions of years. But it is the nature of my science of geology to discover such things.

Kaaterskill Falls is a wondrous place, but it can be a dangerous place too; a number of people have fallen to their deaths at Kaaterskill Falls, you must be careful there. Wait for dry and warm times before you visit. Contact the author at titusr@hartwick.edu  or visit the facebook page “The Catskill Geologist.”