A Different Kind of Protest 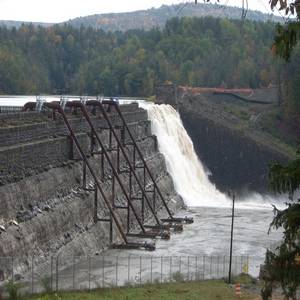 Perhaps you have read the news of the recent rehabilitation of the Gilboa Dam at the Schoharie Reservoir near the village of Gilboa. The city of New York, which owns the dam, has been spending hundreds of millions of dollars to upgrade its structure and to render it ready to survive any potential future flood events. It is said that the dam is now engineered to endure a flood two and one half times worse than the one it survived during Hurricane Irene, just a few years ago. That’s a big win for a local civic group named “Dammed Concerned Citizens” (DCC). But, it is also a big win for New York City. That’s our story today.

This story began about ten years ago when an engineering report found that the dam did not meet “. . . safety standards associated with modern engineering practices . . . “. These understated words set off alarms. People were aware that there had been a surprisingly large number of “hundred year” floods in the recent past. Such floods had struck in 1955, 1987, and 1996. Now they feared that the impact of one more awful flood would cause the dam to lurch forward, just a bit, and then give way altogether.  The threat was truly frightening; after all, almost 20 billion gallons of water were pressing against the aged dam. People couldn’t help but to imagine the dam fracturing and breaking up, as masses of water burst through it, and exploding into the valley below. The result of such a total destruction would be a tsunami, rushing for hours down the Schoharie Creek Valley. The horrible wave would pass across Middleburgh and then Schoharie. It would continue into the Mohawk River Valley and then turn east, heading for Schenectady. It was estimated that some 8,000 people might lie in the path of this deluge. Read all that again – slowly –  and just think about it for a moment!

The Gilboa Dam had been constructed during the 1920’s, so it was, by then, a little more than 80 years old. It was, reportedly, designed to last only 50, so it was old. Below the dam, the spillway had seriously deteriorated, with holes eroded into its cement by decades of plunging waters. The bedrock beneath was cut by numerous fractures. The face of the dam itself had been weathering, over all those decades, until it was reported that about seven percent of the original structure had been eroded away. It all looked unstable; it all looked dangerous; it was, all of it, neglected.

The long and the short of it was that any sizable flood might take out the whole dam and result in thousands of horrible deaths. It was estimated that if waters rose to 1,138 feet in elevation, then the pressure would be so great that the dam might just let go.  Dam Concerned Citizens was damned concerned!

Imagine for a moment that we are talking about an old dam, and an old reservoir that lies along the Saw Kill, a bit upstream from your Woodstock, How would you react? We monitored some of the internet chat about all this and found a lot of people felt vehemently that the Gilboa Dam should just be drained and shut down. Close it and be done with it! We are guessing that a lot of you would band together to form something called CDD, “Close the Damned Dam.”

But the people of Schoharie County are not like that. They took a more pragmatic approach. It was not reasonable to demand a closing of the dam. There would be no “occupy Gilboa” here. They would come up with a different sort of protest, a softer, quieter, but unrelenting protest. They aimed at an achievable goal, of infrastructure improvement, aimed at maximizing the safety of the dam.  They knew how important New York City is to the whole of the state and its economy. And they rather thought it would be better to fix the dam than close it. A closed dam would benefit them, but a fixed dam would help everybody.

But they were under no illusions; they faced very serious hazards, and they understood that fact. Lives were, after all, at stake.  Dam Concerned Citizens went to work. They opened a website, which became a public advocate on issues of regional dam safety. For these reasons, they recruited experts on dam engineering and stream flow. They never confronted New York City or its Department of Environmental Protection (DEP), but always kept up a conversation. They quietly, even softly, maintained a pressure to get things going. And they continuously monitored what was going on. Their experts were always quite able to judge whether or not things were being done right.

We, who drive by the dam frequently, began to notice that things were happening. A five foot deep notch was cut into the top of the dam; it would make it very hard for water to rise to that fearsome 1,138 foot level. Siphons appeared; they would drain the dam if things got dicey. Importantly, time had been purchased. Later the dam face was worked on and restored to a youthful appearance – and function. The dam was being fixed. And DCC was closely following the progress.

Gilboa was far enough along, so that when Hurricane Irene struck in August of 2011, it held. There were, indeed, very frightening moments on that very frightening day, but the dam stood firm. Since then, it has only gotten better. And, just recently, the dam has been declared safe. An observance was held, and waters from the reservoir were ceremonially poured onto the dam face. Members of DCC were present.

It could have been so different. DCC could have dug in its heels, resolving to shut down the dam and its reservoir. And maybe they could have pulled it off. But that would have deprived New York City of one of its major sources of fresh clean water. What would have resulted from that? It is probably very good that we will not find out. But there is something else. The city is world famous for the high quality of its water and it is from the Catskills that most of it is derived. Catskill residents take quiet pride in being the source of that water. They want that to continue; they are good neighbors.

We won’t be subtle in stating that the two of us support everything that DCC has done. But, there are lessons to be learned here: First, it is better for parties, with problems like this, to work together. More importantly, it is even better to have a can-do attitude, and to work to solve those problems in a way where both sides come out winners.  Perhaps Schoharie County residents could have been the sole winners – had they really wanted that. But they resolved to find a different kind of protest.