This column is focused on allowing you to see things that have always been right there in front of you. That’s something we geologists are good at. We travel to outcroppings of rock and look into them and see things that we never saw before. We survey landscapes and find meanings in them that we could never before have perceived. That is the nature of a geologist’s life; we are always looking through those windows through time and we are always seeing such wondrous visions, visions of the past.

Let’s take a drive down Rte. 23 near Leeds and see what we can see. Where Rte. 23B enters onto Rte. 23 there is a very fine outcrop. The strata here are of the Helderberg Limestone. This is pretty much the same rock sequence that makes up the cliff at John Boyd Thacher State Park. It is limestone and that means it formed at the bottom of a very shallow tropical sea. I can’t drive past these rocks without seeing images of the Bahamas. I find myself snorkeling in that beautiful sea. 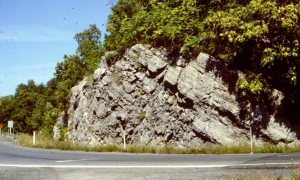 Tilted strata along Rte. 23 near Leeds.

But there is something else, and you have to look twice and think about it before you take notice. All those strata are tilted.  Take a look at my picture. Those strata tilt steeply to the right. That’s just exactly the sort of thing that people don’t normally notice. You do have to think about it to appreciate it. Strata form, originally, on the flat bottoms of the ocean. The seafloor never dips on one direction steeply as we see here. Something must have happened to these rocks.

Geologists recognize a concept called the “principle of original horizontality.” Simply stated that means that seafloors are flat and, because of that, strata accumulating upon them must also be flat. But what if they aren’t? Then we have to figure out what happened to them. Tilting is a good word, a verb which implies that the once flat strata have come to be tilted from the horizontal. But how on earth could that have happened?  Stop and think about it. Those rocks are heavy, very heavy. How could they have ever have become tilted. One end of the outcrop must have been lifted, and how on earth can such a thing happen?

Now you see what is happening. We have stopped and actually looked at an outcrop and all of a sudden we have a lot of very interesting questions. It was about 300 years ago that early geologists first paid attention to this sort of thing and you can just imagine how perplexed they must have been. What could have caused such phenomena? Back then, they could not even guess.

Today, it’s different. We have scientific theories to explain such things. Today we understand a lot about what is called mountain building. We can look to the east and we recognize that once, long ago, something collided with North America. That collision squeezed the rocks throughout what we call the Appalachian realm. The compressed rocks acted like the folds of an accordion; they were squeezed and deformed just as an accordion is.  A lot of that deformation consisted of simple tilting of the sort we see here.

That something that collided with North America was essentially a very large portion of Europe. Just as India is, today, colliding with Asia, once Europe collided with North America. When you stop and think about that, then you can appreciate that this sort of thing is capable of lifting and tilting such enormous masses of rock. This is big time geology. This is mountain building and that makes it important.

But, you might ask, where are those mountains? The answer to that question makes this outcrop still more interesting. Look up into the air above it – thousands of feet up – actually a mile or so. There used to be mountains up there; they have all eroded away.

Now it is fitting to take a few steps back and look, now more deeply, into this outcropping. Using your mind’s eye you can see the aqua colored waters of an ancient tropical sea. Then you watch as thousands of feet of sediment pile up upon this site. Slowly those sediments petrify; they become brittle masses of rock. Then, the ground starts lurching and rising to form a great range of mountains. The old ocean quickly drains away. Those mountains reach great elevations and tower above the horizon. Now wrenching motions are contorting the strata within; this is the chapter which witnesses the tilting we first came here to ponder.

Then all becomes silent; the mountain building is over. For millions upon millions of years the old mountains slowly decompose; they weather and erode away. Eventually, they build a highway here.