The Hyde Park Deltas – Part one

Most of the time we are re-running old newspaper columns on this site. But we expect to do some original work as well. That is the case here today. We are publishing the first half of a study we recently did on the geology of the Hyde Park ice age deltas. We hope that you will be able to go to Hyde Park and see what we have seen. We are publishing this again because we have new photos for Part Two

The town of Hyde Park is built upon a broad flat platform. It’s a natural landscape feature and it needs to be understood. When you drive into the town, we want you to take note of it. From the north, you pass the Vanderbilt Estate with its endless front lawn. Then the highway passes through the urbanized part of the town. That area is just as flat. Farther south is the Roosevelt Library and Museum. See its expansive and, again, very flat grounds. All this flatness begs to be understood. There is a pattern here, and we always say “when Nature presents scientists with a pattern, she demands an explanation.”

We like to bring a barbeque skewer along with us wherever we go. When we want to investigate this sort of flatland we try to drive it into the ground. If there are rocks, which there usually are, we have little luck. But – if the skewer slides in easily – then we have likely found a glacial lake bottom. That is the case at Hyde Park. Take a look at our map. All the yellow is flatland where there are few, if any, rocks in the ground. 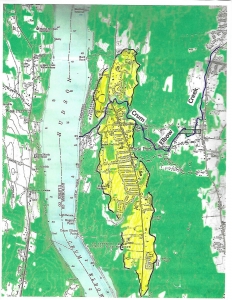 Yellow on map is delta flatland. Base map courtesy of US Geological Survey

But, is this a simple lake bottom or is there more to the story? Notice that, on our map, the yellow flatlands lie at the downstream end of a stream with the unlikely name of Crum Elbow Creek. Long ago, glacial geologists recognized that that all these flatlands comprised an ice age delta, sometimes called the Hyde Park Delta, the delta of Crum Elbow Creek. The New York State Museum map of ice age features actually portrays two deltas here, one north of Crum Elbow Creek, with a second and larger one, just to the south. This is important, and we should name the two deltas. Let’s call the northern one the Vanderbilt Delta (brown) and call the other the Roosevelt Delta (yellow). 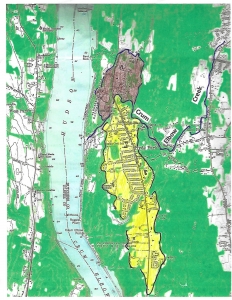 Back during the Ice Age, there was a sizable lake flooding all of this part of the Hudson Valley. It has been called Glacial Lake Albany. Crum Elbow Creek is a long flow of water and, back then it was likely carrying a lot of sediment. Most of that sediment was deposited as the delta where the creek flowed into Lake Albany. The top of a delta is always flat and it roughly corresponds with the old lake level. That’s called the topset of the delta. That would have been at about 180 feet in today’s elevation.

The front of a delta is typically a steep slope called a foreset. That explains another landscape feature that we see throughout Hyde Park. Take a look at our photo from the Vanderbilt mansion. The mansion was located at the top of the steep foreset slope. That offered the Vanderbilt’s a nice view of the Hudson River. Walk north and south from the mansion and enjoy this view. 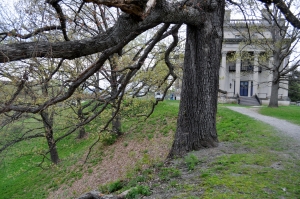 The Vanderbilt Mansion from the south. Below it is the foreset slope. 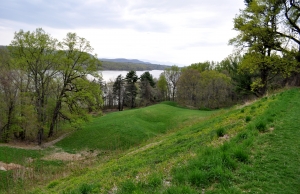 Foreset slope, north of the Vanderbilt mansion, with its view of Hudson.

Now we have learned a lot about Hyde Park. You are not likely to be able to pass through town without envisioning yourself in a very different landscape, an ice age one. With your mind’s eye look west and see Glacial Lake Albany spread out before you. It extends all across the Hudson Valley. The lake was almost two miles wide here. That’s about four times as wide as today’s river is.

But, the more we worked the area, the more we saw problems that needed to be explained. For starters, we thought the flow of Crum Elbow Creek was a bit odd. The stream has its head about ten miles north of Hyde Park. It flows in a remarkably straight line, just a little west of south, all the way to Hyde Park. Much of the way, it follows Rte. 9G. But then, at the village of East Park, it turns sharply to the west and flows directly into Hyde Park and, from there, into the river (see our maps).  Back during the Ice Age, that took it right into Glacial Lake Albany. We wondered if there was a story to that sharp westward turn. We are scientists; again, we are supposed to wonder such things.

That’s when another problem appeared. We were now looking more carefully at the map and we suddenly noticed that, while there were two deltas at Hyde Park, they were also of two different elevations. The Roosevelt Delta, south of Crum Elbow Creek, had a topset at about 180 feet in elevation, but the Vanderbilt Delta, north of the creek, lay at just about 170 feet. We were, clearly, looking at two separate events.

This is when it started getting exciting. We soon had a flash; all of a sudden we saw what had happened, and that was a genuine epiphany. We will be back next Thursday with the solutions to these problems, but in the meantime we want you to have a chance to ponder them, and see if you can come up with the solution yourself. We leave you with a blown-up version of our map, focusing on the southern part of the Roosevelt Delta. Take a good look and see if you can solve these problems without our help.

Do you have some ideas? Write to our facebook page “the Catskill Geologist.” 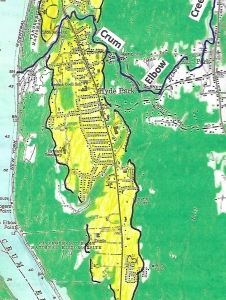 Close-up of the southern delta.