THE BLUES ON A RAINY NIGHT

This is an old one, from my first year at the Woodstock Times. This column has been adapted for several editions of “The Catskills: a geological Guide.”

“Carved in stone” is a common enough cliché. Its meaning is plain enough: any concept etched in stone is permanent, it will never go away or be altered. There is an important implication in the term; something carved in stone must be of some real importance. Otherwise – who would bother?

To a geologist things carved in stone are much more commonplace. Lots of things are carved in stone. Some of the most mundane events have, by happenstance, been recorded not by a skilled engraver, but by the everyday events of nature. If you know what to look for, sometimes the rocks light up with unexpected etchings.

You have, no doubt, commonly walked the sidewalks on a rainy night. To the young and in love it can be a great pleasure; to most of the rest of us it’s just cold and wet. But, in the Catskills, a dark, rainy night can bring a journey into the past. You see, most of our Catskill villages still have a lot of old bluestone sidewalks, and each old slab can be a time machine.

Bluestone has long been quarried in the Catskills. This durable and attractive stone holds up very well to the traffic of feet. It was deposited nearly 400 million years ago mostly near the coastline of the ancient Catskill Sea. Its sands once traveled down the rivers of the Catskill Delta and came to be deposited as flat sheets on the shallow sea floors or within the river channels themselves. With time came hardening and then lithification. With a lot more time came quarrymen to chisel out these stones and cut them into sidewalk slabs. Now they line our streets, but they often still retain vestiges of their venerable past.

Go out, find some bluestone walks, and really take a look at them. Most Woodstock sidewalks are now of concrete, but there still are some old bluestone slabs. Look at the sidewalk along the cemetery on Rock City Road, and on Tinker Street near Maple Ave. Look also at the stones leading to people’s front doors. Many are featureless, but many others display sedimentary structures which take us back to moments of time in the Devonian.

Look for two of these structures. The first is the most obvious; these are the ripple marks. Devonian age currents passed across these Devonian sands and sculpted them into the delicate ripples. Often the ripples are steeper on one side. That steep side is inclined toward the direction the current was flowing. It is a most remarkable experience to visualize these briefest and most ephemeral events of so long ago. They should not exist. How could such delicate structures survive long enough to turn into stone? And yet, there they are. Were these currents of any importance? Not at all; they were just the most everyday of events and yet they are “carved in stone.” 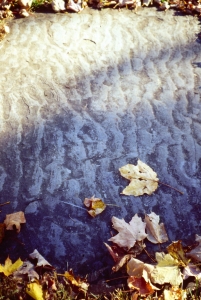 The other structure is the flow lineation. Again as currents sweep across sea floors or stream bottoms they sculpt the sand. This time the resulting feature is virtually invisible. The grains are lined up into a subtle lineation which only appears millions of years later when the stone cutter splits the rock. The resulting fracture has a faint lineation to it.

Both of these features are quite clear in broad daylight and not much harder to see at night, under street lights. But on a rainy night, when the street lights are reflected off the wet sidewalks, these features light up. They are almost electric. It’s something to look for anywhere there are bluestones, which is all of eastern North America. I found a lot of flow lineations on the bluestones of Woodstock, but only one good ripple marked slab. That was on the first place I looked: the doorstep of Woodstock Wine and Liquors.

So you don’t have to be young and in love to enjoy a walk on a dark rainy night. Ripple marks and flow lineations are nice too, although they do come in a distant second place.

All day long, very moist air has been rising up the slopes of the Acadian Mountains, and this has triggered a series of severe thunderstorms. Dark banks of towering storm clouds rise above the 32,000-foot-tall mountain peaks. A great col lies between two adjacent summits, and this forms a huge geographic bowl. Three closely spaced lines of thunderstorms have unloaded, in quick succession, upon this vicinity, and the rains have flooded the bowl. The rain of the first line of storms quickly waterlogged the soils and the subsequent torrents have raced off downhill in deep, fast-flowing erosive streams. Deep gullies have been rapidly cut into the soft, blue-black upper slopes of the bowl. Vast amounts of sediment have been mobilized and a thick ooze of dirty water (in fact, almost watery dirt) has funneled into gullies too numerous to count. Downslope, the gullies combine into several powerful cascading streams. The flows are now too great to be accommodated by the temporary channels they have cut, and so the deep channels are being widened rapidly. More dark earth is engulfed by the erosive powers of the expanding flows, and whole earthen slopes crash down into the torrent. The rush of the confined water is being pushed and hurried along by the great amounts of water backed up behind.

From various compass points, similar flows combine to a point well down on the face of the Acadian massif. Here, today’s cascade, and many earlier ones like it, have combined to carve a great vee-shaped cleft in the mountain range. This gap dwarfs the canyons above it. Through this cleft, on this day, flow several large Niagara’s; this is a catastrophic event, a thousand year flood.

Below these narrows, the Acadian slopes level out. Vast piles of coarse sand and gravel have formed an enormous, rounded apron of sediment, draped against the slopes of the Acadians. As it flows across this slope, the water breaks up into a number of smaller streams, which continue several miles down the gentle slope until a level nearly that of the sea is reached. At sea level, the streams enter a broad, flat delta top landscape, which is a morass of flooded bayous, marshes and ponds.

The drainage of the Acadian slopes thus forms a great hourglass, and this whole drainage system functions as a giant mountain-destroying machine. The upper basin makes up the wide top of the glass where the rain water is gathered. As it cascades down the slope, it erodes into the mountainous landscape. Below, the narrows make up the constricted middle of the hourglass; here the flow is most effective, and water with its burden of sediment is efficiently transported away from the mountain. The gentle slopes reach down to the flat morass that makes up the bottom of the hourglass. This is where all the material eroded from above ends up.

The morass I speak of makes up the great Catskill Delta. Now, its various glutted and disorganized channels of water make their ways toward the sea. These channels are not nearly large enough to hold the water, and they are in full flood. The blue-black floodwater streams have fanned out across the delta plain. Much of the foliage that had grown along the streams has been swept away. Beyond the now-submerged stream channels, the flood currents slow down and the sediments begin to be deposited as dark horizons of muddy sand. Many plants are being buried within these sands; those that had hung on against the currents are being buried in an upright, standing position.

Meanwhile the main flow continues down the channels of the delta. Downstream, the flow is still rapid, but it is beginning to ebb. Colonies of river-dwelling clams are overwhelmed and are quickly buried by masses of sand. These clams have little to fear; muscular and active burrowers, they will not remain buried for long. At the mouths of the Catskill Delta rivers, the waters, dark with sand and silt, are being disgorged into the western Catskill Sea. From above, large plumes of dirty water can be seen slowly expanding out into the sea. Many tree trunks and a flotsam of broken foliage drift seaward, half hidden in the dark plumes.

By midnight the storms have long been over. The skies are clear and the stars shine, competing with a wine-colored moon. The upper slopes of the Acadian Mountains are now dark and silent. Further downstream, the churning flows of the day are still rapid and gurgling with noise, but the normal languid flow of the delta will soon return. The rivers are still dirty, but they are clearing. Offshore the plumes of sediment are settling into thick strata of sticky sand. A large number of shellfish are dying in that burial; they are the ones which cannot burrow to safety. Their shells will lie, buried as fossils, for at least 400 million years.

It has been a very hard day for the biota of the Catskill Delta. But nobody cares. The world of the Devonian is a soul-less one; there is no mourning, no grief, no pity or even self-pity. Indeed, there is no real understanding of exactly what happened today, and by midnight, there are few living creatures who can even remember these terrible events.

Overnight, the currents will slow down enough so that horizontal horizons of sand will accumulate across large expanses of river bottom and seafloor. These deposits will become bluestone.

Up river, the first of many freshwater clams is emerging from the sands, having escaped its entombment. Life goes on.