Last week, we visited Nanny Goat Hill, a site in Saugerties, which is slated to be developed for a new hotel, conference center. We are told that plans call for the hill to be dynamited, and 19,000 cubic yards of rock will be carted off to leave space for a two story parking garage. We were asked by local residents to look over the site and to see if any interesting geology would be destroyed. We did look it over and found an ancient sequence of sedimentary rocks, which formed at the bottom of a very deep ocean. That was last month; today we would like to return to this location once again and see its history from another vantage point. 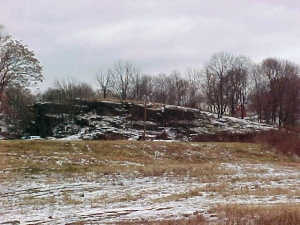 Our premise is that any location has a very long history and bits of that history can be deduced from the evidence. Last time we looked at the bedrock; this time we will look at the landscape. If you view Nanny Goat Hill from Krause’s Candy Shop, you will see what looks like just any other hill. But a geologist will be attracted by the shape of this hill. There is something special about it, and that something has a story to tell.

If you look carefully, you will see that there are two distinctively different sides of the hill. To the east (right side if photo), Nanny Goat Hill is a long low ramp. To the west (left side), it is an abruptly steep slope of bedrock, nearly a cliff. It’s so easy to not notice such a thing; it’s so easy to dismiss such a landform as having no significance whatsoever. But to the experienced geologist, this form presents us with a journey into the Ice Age.

The morphology, or we should say, the geomorphology, here is a common ice age phenomenon called a “roche moutonnee.” That has commonly been translated as “sheep back” from the French, but we don’t know why; they don’t look like sheep to us. The form recalls the advance of the ice during an episode of glaciation. The gentle slope faces the direction that the glacier advanced from. The ice, as it moved westward into Saugerties, encountered the bedrock knob that is today’s Nanny Goat Hill, and advanced up its slopes.

Back then the hill would have had a very different shape to it; we can’t imagine exactly what it would have looked like, but it was different. The advancing ice scraped its way up the eastern slope and began to grind away into the rock there. The bottom of any glacier has enormous amounts of sand and gravel and these materials act like the sand of sandpaper. Over a period of time the grinding ice planed off that eastern slope and shaped it into the low, smooth feature we see today.

When the glacier reached the other side of the hill, its behavior changed. Instead of having a grinding effect, the ice did something very different. The ice formed a bond with the bedrock. There is usually some water at the bottom of a glacier. It soaks into cracks below and then freezes and forms that bond. That bond was a very strong one. Now a great tension had been created. The ice was moving to the west, but it was stuck to the bedrock. Something had to give; either the ice would shatter, or chunks of bedrock would fracture and break loose. Probably both occurred, but our interest is in when the bedrock broke. The sticky ice would have adhered to those boulders and plucked them loose and carried them away.

The result of this plucking, over time, was the creation of the steep cliff-like slope on the western side of Nanny Goat Hill. We geologists call this side of the roche moutonnee’ the “plucked side” and we call the smoother slope the “ramp.” A roche moutonnee is often referred to as “ramp and pluck topography.” These sorts of hills are usually very common, but this, so far, is the only one that we have seen in the Hudson Valley. It is a nice ice age feature, and we were very glad to have found it.

This feature did give us a nice journey back into our ice age past. But it also confirmed our thesis about time and places. Once again, as we have seen so many times, a location presented us with the evidence of its own deep past. We were privileged to make two journeys into two of these pasts and we are equally privileged to describe those journeys to you. We hope, when you get a chance, you will visit this site and appreciate Saugerties’ geologic heritage.

Contact the authors at randjtitus@prodigy.net. Join their page “The Catskill Geologist.”