Perhaps you have heard the term “Marcellus Shale” and perhaps you have not, but you will likely be hearing about it many times in the upcoming years. New York State geologists have long known the term, and many have visited outcroppings of the dark shale and sandstone that we call the Marcellus. We have written about it occasionally in Woodstock Times columns over the years. The unit of rock has recently become very important.

Late last year (2007), it was announced by several researchers that the Marcellus might well yield an enormous, absolutely gargantuan, amount of natural gas. Estimates are always just estimates, but people are talking about a two-year supply of natural gas being recoverable from the Marcellus. That’s a lot and, given the circumstances, even the greenest of you will appreciate the pressure to exploit this resource.

What can rightfully be called a “gas rush” has been triggered, and all over the northeast quarter of America the search is on. This is bound to be controversial so, before we go too far, let’s get something straight. We are geologist, and one thing we do is to work to keep you from freezing to death in a cave. So, we are not necessarily opposed to all this, but let’s talk about the science of the Marcellus. There is no possible harm in you coming to understanding the geological story that lies beneath your feet.

It all started nearly 400 million years ago when something you might be tempted to call Europe collided with what eventually became North America. You probably, somewhere along the line, learned about plate tectonics. If you remember some of that, then you will understand the following: The plate collision initiated a crustal uplift which, given time, would produce a great mountain range called the Acadians. Our focus is on the early stages of that collision. There were mountains, but they were not yet very tall. Critically, there was also developing a nearby deep oceanic basin. At its maximum it might have been thousands of feet deep. It covered what now makes up much of the northeastern United States. 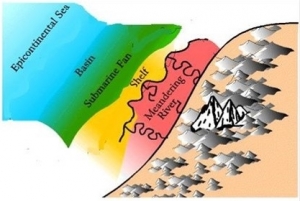 Humans have visited modern versions of such environments. In recent decades we have developed the deep-sea equipment to do so. What was once a great mystery is relatively well known today. It is not the least bit unusual for such a marine basin to be very stagnant. There are few, if any, currents that far down. The rising mountains, nearby to ours, were still so small that they supplied very little sediment to the deep. That’s important.

Raining down from above were bits and pieces of dead organisms and this biological material came to make up a very sizable portion of the Marcellus basin sediment. The abyss was so stagnant that whatever oxygen that might have been there was consumed by microbes. Over long periods of time, the resulting stagnant, anoxic seafloor accumulated, thick sequences of organic rich, fine grained sediment. A lot of the biologic matter became the gas methane and that formed the bulk of the natural gas that would be coveted by humans hundreds of millions of years later. 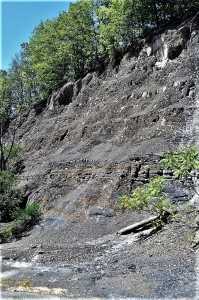 And that is why there is so much interest in the Marcellus. Perhaps you would like to see the unit; it’s not far away. Take Rte. 31 south from Woodstock until you reach the intersection with Rte. 209. Go another 3/4’s mile south and there you will see an enormous outcropping of black shale. This is the Mt. Marion Formation which is an eastern equivalent of the main Marcellus. We found a fair number of fossil shellfish. This does not seem to represent the great stagnant abyss where natural gas would accumulate. So, our guess is that the Mt. Marion will not yield much natural gas, at least not around here.

Farther down the road, near the south end of the outcrop, we found a more finely bedded sequence of black shale. It is made up of very thinly laminated seams of black shale and it displays no fossils. This, we think, is a deeper part of the old basin and it might be that these strata are richer in gas.

If you visit this site, it can be quite an experience, however, to stand along the side of a highway, listen to the traffic, and to realize that this was once the deepest part of the sea. All around you it was once a dark, quiet and cold seafloor. we will have more to say about the Marcellus in future columns; it may be very important geology.

Reach the authors at randjitius@prodigy.net. Join their facebook page “thecatskillgeologist.”