ON THE ROCKS Updated by Robert and Johanna Titus

It’s always so important to use just the right words. For example, there are all sorts of terms for small bodies of fresh water. One is a puddle. Puddles aren’t very big nor are they very deep. A pool is both bigger and deeper. But pools are smaller than ponds, and ponds are smaller than lakes and so on. Nobody knows exactly where to draw the lines, but there are differences, and you must always use the right words.

In the end, however, it is a somber fact that all these bodies of fresh water, big and small, are doomed. None of them will survive. Lakes become ponds, ponds become pools and pools become puddles. Eventually puddles disappear altogether. Again, nobody can draw sharp lines and you can never watch as a pond becomes a pool. The process is geologic and, thus always, too slow to see.

But there is one time of the year when the process speeds up enough so that we can go out and watch the destruction of a pond and this is that time. Late August is a time of dramatic growth of pond plants. Find a small pond in your area and give it a look. Quite likely, all around the edge, you will see a thick scum of algae. There’s quite a lot of biology going on in there right now especially among the algae. All summer long, algae population curves have been steadily and slowly rising. But in late August the population growth curve steepens – dramatically. Algae populations skyrocket, frighteningly. Not surprisingly, populations exceed what’s called the “carrying capacity” of the environment. Probably such materials as nitrogen, potassium and phosphorous run out. Then populations crash catastrophically. A population crash should be an awful event, but algae don’t care. Come next year their populations will resume the cycle and start rising again. All will be repeated next season.

It’s not just algae, there are plenty of pond plants rooted in the shallow waters. They are growing rapidly as well. All in all, the edge of a small pond is right now a fine place for plants and plant debris to accumulate. And a little later in the season, tree leaves will fall into the ponds and wind will blow them into the shore zone as well. Over the winter, the remains of dead vegetation sink to the bottom and become part of the sediment down there. That makes the sediment around the edge of a pond all the more fertile, more nitrogen, potassium and phosphorous. Next year more and more plants will participate in this seemingly endless cycle. 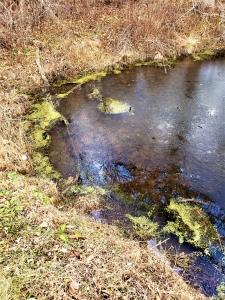 It is the nature of things for a floating mat of plant debris to develop around the edge of the pond and, with time, this mat expands outward toward the middle of the pond. Meanwhile the remaining clear waters, out there in the middle of the pond are becoming more fertile themselves, still more nitrogen, potassium and phosphorous. A feedback process may well occur. The fertility of the water encourages plant growth and plant growth contributes to the fertility of the water.

The foliage around the edge of a lake serves as a trap for wind-blown sediment, mostly silt and clay. Grains blow into the water and settle, as sediment, into the space between the plant roots. With time, an impressive accumulation of organic-rich sediment develops around the edge of the pond. As the sediment fills in the pond shrinks.

As time passes, advancing mats of plant debris will form a material called peat and it is peat, along with the sediment, that will eventually fill in the entire basin. In the end the pond is doomed. It will fill in with peat and a mixture of silt and clay. As things continue to change you have to keep finding the right words. The pond will evolve into swamp, the swamp will become a marsh, and the marsh will transform into a bog. These are often called “wetlands,” and people protect wetlands. But even protected wetlands are doomed. Wind will bring more silt and clay and fill in the space where water once was. The wetlands thus dry out and disappear altogether. That’s the nature of things geological; nothing lasts forever.

Contact the authors at randjtitus@prodigy.net. Join their facebook page “The Catskill Geologist.” Read their blogs at “thecatskillgeologist.com,”