Dawn of the Devonian
Greenville Press
Feb. 3, 2005
Updated by Robert and Johanna Titus

You have, no doubt, driven down Rte. 23 on your way towards the Rip Van Winkle Bridge, and passed one or more vans parked along the large limestone outcrops that are commonly seen all along the highway there. Along the road, large numbers of students can be seen pounding with hammers on the rock ledges. These are geology field trips. Students and faculty come from colleges all over the northeast to visit these rocks. 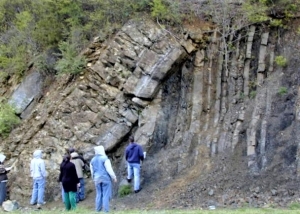