The Ice Age at the Mountain Top Arboretum
On the Rocks

While we spend a lot of time out looking at our region’s geology, we also make real efforts to be active with many of our local Catskills civic groups, including of course the Woodstock Land Conservancy. Another of those groups is the Mountain Top Arboretum. We have spoken there several times. Have you been there? It’s just north of Tannersville. The Arboretum is home to a collection of mostly local and native tree species. Having been founded in 1977, those trees have not had time to get to be very tall, but they are coming along.
. Actually not all of the trees up there are local, and some not only came from far away, but they date back to much earlier times in Earth history. Have you ever seen a Metasequoia? Its common name is the “Dawn Redwood.” The genus evolved about a hundred million years ago, during the Cretaceous time period and was ancestral to the giant trees of today’s California. Well, a few of them have been planted at the Arboretum. They are worth the trip all by themselves.
But, curiously, trees are not the topic of today’s article; this is, after all, a geology column. Recently, the Arboretum asked us to conduct a survey of the geological history of their property. We do that sort of thing frequently. We went up there and poked around. What we found is some very good ice age history. And to make it better, much of this ice age history is packed into just a quarter acre of land right next to the parking lot.
Let’s take you up there. Drive through Palenville and Tannersville on Rte. 23A; then turn right (north) on 23C. You are definitely on the proverbial right side of the tracks and you will see some very nice summer homes along the way. When you get to the Arboretum, you will find that parking lot right next to the highway. Just across the driveway is a low exposure of Devonian aged sandstone.
This is located right at the gate to what is called the West Meadow. As soon as we reached the exposed bedrock we saw evidence of an ice age history here. We looked down and saw what is called a glacially scoured surface. The rock here was ground into a smooth surface, mostly by sand carried by a passing glacier. The weight of the ice had pressed the sand into the bedrock, just like sandpaper. That’s why it is so smooth. 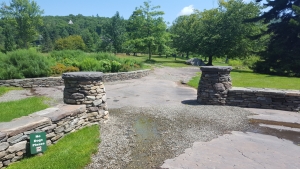 There was more, that glacier had carried cobbles and they too had been ground into the bedrock. That left scratches behind. All of them had nearly perfect north-to-south orientations; this recorded the directions of the glacier’s flow. Geologists call such scratches “glacial striations.” You will have no trouble finding them.
Then we noticed something else. Strata of sandstone had been broken loose by the passing ice. The advancing ice had formed a bond to the rock and, as the ice moved south, it yanked or plucked rock loose. This left low ledges of sandstone facing due south. See our second photo. 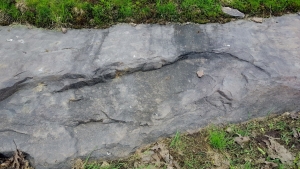 After visiting the glacially scoured landscapes of the West Meadow, you might go back to the parking lot and get a map of the Arboretum trails. Return and head east on Maude Adams Road. You will pass the East Meadow on the left and then reach the Hemlock Trail. That trail will take you south through what is called the Spruce Glen, all of this is Arboretum property. Look left and right; you are passing through a glaciated landscape. Here there is no bare bedrock exposed, instead this was a location where retreating glaciers left behind hummocky heaps of earth as they were melting. This records a time of global warming.
We are geologists; we are never entirely in the present when we are out exploring; we always let our mind’s eyes take us into the past. We were walking south on the Hemlock Trail and then turned around and looked north. In front of us we saw the edge of a melting sheet of ice. It was about 14,000 years ago. This was very late in the Ice Age and we had landed here on one of those increasingly common warm days. Before us, the disintegrating glacier rose up and presented us with an image of vast volumes of meltwater pouring out of large crevasses all across its front. Streams flowed past us, left and right.
But there was more; those heaps of earth lay all about, all of them left behind by the melting ice. There was no vegetation. Life had been following the melting glaciers and heading north, but it had not yet returned to the Arboretum grounds. Many cobbles and large boulders lay all about us. Otherwise, it was a bleak, barren and inhospitable landscape. In the distant future geologists would call this sort of thing a recessional moraine. But, unlike those other future geologists, we did not have to imagine it; we were privileged to witness it for ourselves.
We turned south again and continued along what would eventually be the Hemlock Trail–many thousands of years after the Ice Age had ended. Soon we spied a pond. The shallow valley here had been blocked and dammed by some more of that moraine material. We walked down to its shore and gazed into its black waters. Then, in a dizzying flash, we were transported back to our own time, the spring of 2018. We were standing at the very end of the Hemlock Trail, in front of us was a dock that led out onto what is called today “the Hidden Marsh.” There was no longer a pond here; it had filled with the sediments and the vegetation of that marsh. 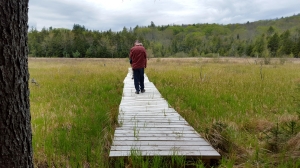