A Bump in the Road
The Greenville Press
May 5, 2004
Updated by Robert and Johanna Titus

You might call it a hillock, but it’s hardly more than just a bump in the road. Small as it is, it has been posing problems. If you are driving east, you go up and over the bump and then the road veers to the right without much warning. If you are driving west, pretty much the same thing happens only the road veers to the left on the other side. Westbound drivers seem to have the most trouble. If you know the road then there are no difficulties; you know which way to steer. But if you don’t know the road, then you can have real problems on the other side. If you are going too fast, your car may leave the ground for a moment. When you land you have to brake quickly, and steer as fast as you can to avoid running off the road. And there have been some bad accidents here. Two years ago, a helicopter had to be called in to evacuate a victim. 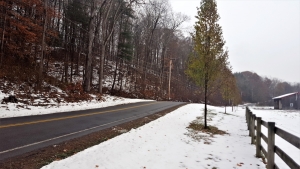 It’s seems that more people don’t know the road on Friday and Saturday nights, but problems can happen on any day of the week. We are talking about County Route 67, across from the Freehold Airport, about a mile west of the Freehold four corners. That little bump in the road seems to always be having accidents. And, even when there are no accidents, it is common to see dark tire marks in the danger zone. People often just avert serious trouble.
These sorts of problems plague many stretches of highway all across the land, but this one is just a little different. This road hazard is also a geohazard. The word “geohazard” was coined some time ago to describe a geological phenomenon that poses a threat to people. Volcanoes and earthquakes are very good examples. Flood prone stretches of rivers are geohazards and so to are landslide prone slopes. So, how is it that some simple bump in the road constitutes a geohazard?
The answer to that question comes from a general survey of the area. This “bump” measures about five feet in elevation and it stretches about 75 feet or so up and down the road. That’s a reasonably large heap of earth. So, how did it get there? If you look just uphill from my bump you will see a fairly decent little canyon which descends from the hill above. Canyons are normally carved by streams, but this one seems the exception; there is usually only a very little water in it. Spring sees a decent flow and the rest of the year is pretty quiet. 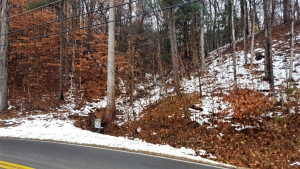 And there hasn’t been much water in it for a long time. This canyon is a paleo-form; it is a landscape relict of the ice age. When we started to notice all this, our bump in the road gradually became a very interesting feature. In our mind’s eyes we were transported back to the end of the Ice Age, to a time when the glaciers were melting away from the Greenville vicinity.

April 3, 12,341 BC, late afternoon – This part of the Catskill Creek Valley is very different from what it looks like today. The ice age is ending, and the last glaciers have just melted away from this the lower part of the valley. Up the valley and in the mountains to the south, there is still a lot of ice and it is melting. Catskill Creek is swollen with all the meltwater. It doesn’t even resemble today’s creek. A complex plexus of intertwined streamlets crisscrosses the valley floor. The waters are all brown with mud. In between the streamlets are many low sandbars. Actually. “mudbars” would be a better term for what is here. The mud is shining in the late afternoon sun.
There is some vegetation, but not what we are used to today. The middle reaches of the slopes above me are littered with small pine and spruce. These trees have been migrating north, following the melting ice; they are quite capable of broadcasting their seeds fast enough to keep up with the melting. Someday, there will be real forests here, but that will not be for decades. Meanwhile, up in the Catskills, the slopes are barren except where ice still prevails.
We are standing just east of our bump in the road. From above us, to the right, is the roar of a great torrent of water pounding out of the hill above. This is a meltwater stream and it is white with foam and very noisy with the power of its flow. After cascading out of the canyon above, its currents “land” on the valley flat. The pounding currents splash down and generate a great spray of water. It catches the sunlight in a beautiful rainbow.
Beyond the water reforms itself into a small stream which flows quickly off into the currents of Catskill Creek. These waters leave behind a growing pile of earth. This is the sediment that our meltwater stream has eroded out of the hill above. The torrents were very capable of carrying this material down to the valley flat, but once the current reached that flat, it slowed down and was unable to transport its sediments much farther. That heap of earth was forming into a fine fan-shaped structure. Thousands of years later when the next geologists would come here, they would call this feature an alluvial fan.

Our journey into the geologic past of Route 67 had offered a view of the formation of our bump in the road and it had also explained the canyon above. Now we could take another look at this whole stretch of the highway. Soon, we would see more ice age canyons. There is a fine one right across from the airport’s “art gallery” building. This one deposited another little bump in the road, but there it is not quite as high and there are no surprising bends in the highway. It causes fewer problems. Then, there is another just short of Storey’s Nursery; the old gray farmhouse was built upon that one. This one is very low, and the road is straight, so it should not be a geohazard.
All in all, it would seem that this stretch of Catskill Creek had more than its share of ice age drainage. We are guessing that the hill which makes up the O’Hara Corners area had a fair amount of ice on it after the rest of the local glaciers had cleared Catskill Creek. As this iced melted our several little canyons were temporarily glutted with meltwater. For a short period of time these canyons were very erosive.