Mudslinging in the Hudson Valley
The Vanderbilt and Roosevelt mansions
On the Rocks
Feb. 23, 2007
Updated by Robert and Johanna Titus

The east bank of the Hudson River was once a very fashionable location where only the very best people lived. Such times and attitudes have faded, but a legacy still remains; along that bank of the river a large number of very fine old houses can be seen. Vanderbilt’s, Livingstons, Roosevelts and other notables may not live there anymore but many of their old homes remain as public parks. Well cared for, these old homes should last a very long time. But just how long is “a very long time?”
To a geologist a very long time is, well, not so long. When we visited The Vanderbilt and Roosevelt homes recently, we noticed that the two had something in common. Both are built upon the same geological foundations and both, eventually, will face the same fates.

Wander around the grounds of the Vanderbilt estate. You will very likely enjoy seeing an abundance of very old and very large ornamental trees. And then there is the house itself, it’s quite a sight too. What you probably won’t notice, at least not right away, is how flat the grounds are. This is no accident; we are looking at the top of a delta that once stuck out into a lake that was here. That delta was part of Glacial Lake Albany, the great ice age lake that once filled the Hudson Valley. Delta tops, more often than not, are flat as a pancake. The fine-grained muds that accumulate upon them settle down in flat sheets. But Glacial Lake Albany is long gone, it drained about 14,000 years ago and that left the delta high and dry. The whole town of Hyde Park is one large dry delta top. That’s what made the Vanderbilt site such a desirable location. The house sits upon a high flat delta top, commanding a very fine view of the river. The Vanderbilt’s couldn’t resist it. 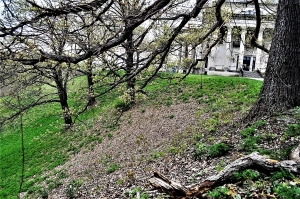 All this is the case for the Roosevelt home and many, many others. But scenic though these river view sites are, there are long term hazards. Just in front of both the Roosevelt and Vanderbilt homes are steep, almost vertical slopes. This is not accidental, there is a pattern here and nature is sending out a warning. These steep slopes are the headwalls of what geologists call “slumps.” What has happened here is that large cohesive masses of old lake muck have detached along curved fractures and slid downwards. This is an intermittent phenomenon, it happens occasionally during relatively brief periods of movement and then there is little activity for very long periods of time. The hazard is thus somewhat like that of an earthquake: long periods of quiet, interrupted by moments of destructive activity. 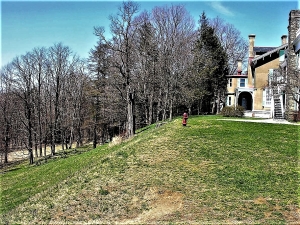 Springwood – The Roosevelt Mansion – on edge of  Hyde Park delta

What triggers a slump? Most likely a period of very wet weather. The old lake sediments become waterlogged and unstable. They become very soft and go through an episode of slumping. By the time that is over, the climate has probably dried out enough to delay further action for another long while.
Wander the grounds of these fine old mansions and you will soon find a number of large semicircular slump features, right at the edges of the old delta. These are places where, long ago, slumps occurred. At the bases of those large semicircles the ground is hummocky. Those are the downhill scars of the old slides. The landscape speaks to us of slumps long past, but it also speaks to us of slumps yet to come. That’s what this column is all about. Someday, probably a very long time from now, the very land beneath these fine old mansions will become wet and unstable. The earth will heave and some or even all of the mansions will collapse. It’s a sad fate for some fine old mansions, but Nature does not discriminate in favor of the wealthy, Nature does not care.