A VIEW FROM THE MOUNTAIN HOUSE PORCH

The view of the Hudson Valley from along the Catskill Escarpment is one of the great sights of the east. You can enjoy it anywhere along a ten mile stretch from Overlook Mountain to North Point, but the most famous vantage point is long gone. That was the 130 foot long piazza of the old Catskill Mountain House Hotel. A 70 mile stretch of the Hudson lowlands lay visible below the hotel site. On certain days, when the clarity and humidity are just right, the atmosphere becomes a magnifying glass and that landscape seems to reach out to you. 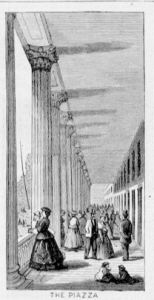 Mountain House guests commonly arose just before sunrise. With a little luck they got a special treat. The cool morning fogs would enshroud the valley below. Then the Sun would slowly rise above the clouds, illuminating them brightly from above. It’s still a sight to see.

Beautiful as it is, this view thwarted the efforts of artists to capture it. Seventy miles is just too much to put on a canvas and anything less just won’t do. Only Frederic Church solved the problem. In his “Sunrise in the Catskills” he painted the view at dawn. He showed the Sun rising above a valley filled with clouds. That left all these unpaintable 70 miles of valley floor to the imagination of the viewer. It worked; the painting is a gem! 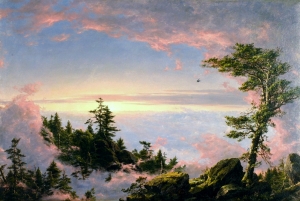 The twentieth century brought something new to the view. With electricity, the nighttime valley gradually lit up. On a clear, dry, moonless night, with the starry sky above and the lights below, the view is another great sight to behold.

The hotel is long gone, but the view remains. The Mountain House site remains a popular goal for the hikers and picnickers at the North Lake area. It’s a popular draw for visiting geologists as well. Our colleagues and we come to see the view just like anyone else. But we get to see two views at North Lake: One is the landscape as it is, and the other is as it was during the Devonian age. To the far east is the low profile of the modern Berkshires. These humble mountains are the erosional remnants of older and very larger mountains. They are the roots of the old Acadian Mountains.

Out there, between 350 and 400 million years ago, a great mountain building event took place. If you sat on the Mountain House piazza for 50 million years or so, the mountains would rise before your very eyes. It was one of the biggest such events to ever occur in eastern North America. At their greatest, these peaks, called the Acadian Mountains, stood maybe 15,000 feet above sea level, and maybe more, even a lot more!

As we look east from the hotel piazza we can still see those old mountains through our mind’s eyes. The jagged peaks are snowcapped. It’s a tropical climate here, 370 million years ago, so only the highest slopes are white. Below the snow, the mountains are a uniform smoky blue. There is enough haze so that the details of the landscape are not clear, but you can see many deeply cut gullies in the upper mountain slopes. It’s common for heavy rains to activate the gullies which then tear into the mountain. Farther downhill, the gullies merge into very substantial and extremely jagged canyons. During rainy times, great cataracts of water plummet down these valleys. The waters are brown with freshly eroded sediment; there is no flood or erosion control in the Devonian.

Toward the base of the mountain range the canyons empty out onto great heaps of sediment. These are beautiful; they have been sculpted into gently sloping fans and their light colored sediments shine brightly in the sun. There is no foliage to cover these fresh sediments.

But there is foliage farther below. In front of the fans is an enormous landscape of swamps, shallow ponds and many streams. It’s a huge delta complex which geologists have come to call the Catskill Delta. The delta is teeming with life, mostly primitive plants. There is an irony here. In looking at this ancient delta environment we are looking at the Catskills of today. That’s because, with time, the sediments of that ancient Catskill Delta spread out across much of today’s New York State. They hardened into rock and are now the sedimentary rocks of the Catskills of today. In the great cycles of time, one landscape is the parent of another.

And so it is that we sit upon the porch of a long gone hotel and gaze at mountains which eroded away 300 million years ago. Such are some special moments in the lives of geologists.