Tafoni: A real mystery, and a local one at that

Phoenicia has been in the news a lot over the years. It is best known as a place that has had serious flooding problems. Various northeasters, along with the occasional hurricane, are enough to fill Stony Clove Creek to overflowing. The creek swells up over its banks and makes a mess of the town. Engineering efforts to improve flow beneath the bridge there have been controversial. Their effectiveness is questioned.

But, that’s not the topic of this column.

We were recently invited to go to Phoenicia and take a look at some very strange geological phenomena. Our host was Paul Misko, of the Catskill 4000 hiking club. As a veteran hiker, Paul can be found just about anywhere in the Catskills and he has a real eye for unusual geology, so we paid attention to his “very strange” claim. He had piqued our curiosity and, when we got there, we weren’t disappointed; we found a real puzzle. Across the street from the St. Francis DeSales Roman Catholic Church, is a small park. If you walk into the park from Main Street and bear toward the right (east), you will soon find a small hiking trail. It’s called the Tanbark Trail (you can run a search and get a map of it). Climb up a steep incline, and towards the top you will find a fairly sizable ledge of sandstone. It’s rather commonplace stuff; it is a very typical Catskills bluestone ledge. We recognized what are called cross beds. That is to say that a lot of the strata here dip in one direction or another. They were not very well defined, but they were there. That is normally the case with bluestone that was deposited in river channel sandstones. This ledge is, in essence, the cross section of a very old stream. It’s, like all rocks in the Catskills, Devonian in age, something a bit less than 400 million years old.

None of this surprised us in the least. It was strictly routine stuff. But that’s where we encountered that mystery. Take a look at our photo and see what you think. The first view shows the entire ledge. Commonplace cross-bedded bluestone makes up the whole lower half of the exposure. Up top are a large number of closely spaced and very strange cavities. The close-up view shows a tightly packed cluster of these cavities in the rock. Their shapes vary considerably, but they all show a sort of boxy nature and they seem to form an interlocking network. We would like to use the term honeycomb here, but honeycombs show a consistent hexagonal shape; we don’t see that with these. The rock remaining in between these cavities is narrow. The cavities do not penetrate too far into the rock, just a few inches. And there is no reason to think that there is another horizon of these cavities under the ones that are visible. Thus, they appear to be surficial features. Nevertheless, these cavities seem to be concentrated. Many of these cavities are spaced so close together that they comprise a bigger compound cavity. Whatever it was that formed them was focused. 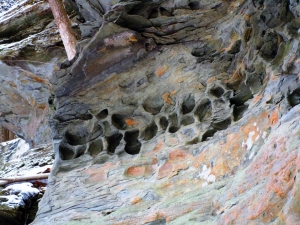 All in all, this is the most puzzling phenomenon that we have seen in ages. There is no trouble putting a name on what is here; it is called tafoni. Each individual cavity is a tafone; lots of them are tafoni. And the terminology keeps getting better; when tafoni occur on cliff faces, as at Phoenicia, then it is called lateral or sidewall tafoni. But, putting a name on something is not the same as understanding it.

What are these features? They seem to be weathering phenomena. Somehow, they appear on the rock surface and grow slowly into their observed shapes, but exactly how? And, also, how is it that they grow in size until they abut each other but do not grow into each other? How do they grow in size without intersecting? Those are very puzzling questions and just naming these things does not provide answers.

Tafoni have been weakly associated with poorly defined stratification on the sides of cliffs and that is the case here. But that still leaves a lot unsaid. Why does this “association” occur? What are the specifics? Salt is commonly cited as an agent in Tafoni development. They are sometimes found on coastal outcroppings, splashed by ocean waves. But there is certainly no source of salt here on a sandstone cliff in Phoenicia. And that begs the question: what exactly is different about his cliff? We have literally seen hundreds of similar cliffs, all through the Catskills and all composed of the same type of sandstone, all originally deposited in the same Catskills Delta river channels. Why don’t all of those other cliffs have tafoni? Why isn’t it that none of them do? There must be something here, right in front of us, which we have missed. This is the sort of thing that makes science so much fun.

Do you have any ideas or questions? Have you seen tafoni somewhere? Contact the authors at randjtitus@prodigy.net. Join their facebook page “The Catskill Geologist.”