We continue our series on the landslide threats of the Hudson Valley. Today we head south quite some distance. We arrive at Haverstraw, a town that lies only about 15 miles north of New York City.  Throughout our series we have emphasized that most of the landslides that we see in our region are natural in origin. Usually heavy rains soak into the soft silty clays of something called Glacial Lake Albany. Water pressure, within those sediments, builds up and those deposits become unstable. The clay gives these sediments a brittle component and concave curved fractures open up. Masses of lake sediments rotate downwards, sliding along these fractures and the landslide results. Quite often, a steep slope, cut by the erosion of some nearby river, contributes a great deal to the hazard. 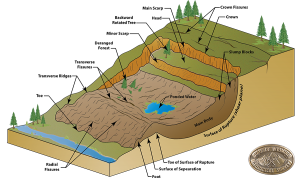 Diagram of a rotational slump

Are these always natural events, or can man play a role? That’s an important question.  There are few, if any, things that we can do to head off natural landslides but, where man is involved, then that is different. At the April 2025 Normans Kill landslide in New Baltimore there is a chance that man’s efforts played a role.  A sizable amount of earth had apparently been dumped at the top of the slope that, soon thereafter, slid. The two of us disagree on whether this led to the slide, but let’s explore the issue in Haverstraw.

Our trip takes us to a location where a terrible landslide once occurred. And, it is among the most undisputed locations where man’s intervention allowed nature to produce a landslide. Haverstraw is located atop a thick sequence of the sediments of Glacial Lake Albany, lying along about three miles of the Hudson’s banks. Lake Albany did extend this far south and more.  A little after the end of the Civil War there was a growing need for bricks to build fire-resistant buildings in New York City. The lake deposits of Haverstraw had been deposited well offshore within Lake Albany and, as a result, they were unusually rich in clay. That made for very good bricks. Not surprisingly, a very substantial brick industry appeared in Haverstraw. As many as 350 million bricks per year were manufactured in dozens of local brickyards. This industry would thrive well into the 20th Century.

seeds of its own destruction. The banks of the Hudson had been tall and steep long before the brickyards arrived. Steep slopes, of course, favor landslides. It got worse. To 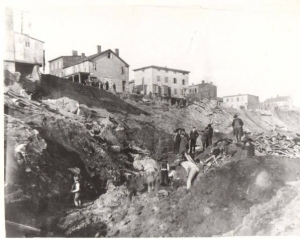 Haverstraw after the landslide

mine the clays people dug into the deposits and created even taller and steeper, and more dangerous, slopes.

Then it got still worse. The downtown section of Haverstraw, along with the brick yards, came to be developed right up against the land excavated for clay. Take a look at our photo, taken just after the landslide, and see how precipitous the slopes were. Then things got completely out of hand. Tunnels were cut under the downtown area, and the brick yards. They were actually mining clay! This foolishness only made an already unstable landscape even worse.

Our journey takes us back to the winter of 1905 and 1906. Early on, it had been a harsh, cold and snowy winter, but then there were heavy rains. It must have warmed up and the rain is likely to have fallen onto the snows, melting them.  You see the problem; great volumes of water had to have been soaking into the ground, making it more and more unstable. And below those increasingly unstable grounds there were tunnels.  A disaster was about to occur!

This brings us to the night of Jan 7th and 8th, 1906. The collapse began in the middle of the night. A full six square city blocks sank into an expanding pit. There were electricity and gas lines in Haverstraw at that time, and they made things worse. The gas lines broke and sparks set the leaking gas ablaze. Most of the town burned. One pauses and thinks of the San Francisco earthquake and fire which also occurred in 1906.

A modern geologist reads the accounts of this awful event and wants to scream. They broke all the rules in Haverstraw. They cut steep slopes into the glacial clays; we call this over-steepening. The tunnels only made it worse, and we just cannot imagine such a thing being allowed nowadays. Then they brought development of the town and the brick yards so close to that steep slope. We shake our heads in disbelief.