Visions of an Art Trail past 6 – North and south Lakes

We continue to follow in the footsteps of the artists of the Hudson River School of Art. We have also been following the Art Trail which honors their memories. We have literally been standing where they stood when they sketched and painted our picturesque Catskill landscapes. In this chapter we are visiting site number six on the Art Trail. That is North and South Lakes.

The lakes were the property of the Catskill Mountain House Hotel when young Thomas Cole visited there in the early autumn of 1825. He must have spent a good bit of time exploring the visual possibilities of the surroundings, and that included the lakes.  He did his sketches for “Lake with Dead Trees” there and put it, along with two other canvases, up for sale – with an asking price of $20 each. It was the making of him as an artist. The three paintings sold quickly and received high praise in newspaper reviews. In short, Thomas Cole wowed the critics. It was, quite literally, the birth of the Hudson River School of Art. And it happened at the lakes.

When we visit South Lake it is quite easy to find our way to the site where Cole must have sat and sketched in preparation for painting “Lake with Dead Trees.” He did it on the north shore of the lake. Curiously, he made that body of water look a good bit smaller than it really is. We were also puzzled by the dead trees and guessed that the Hotel must have recently raised the lake’s dam in order to make it larger. That would have drowned all the trees along the old shoreline. In the far distance was High Point Mountain, looming above the lake. That craggy peak would be featured in countless paintings done in later time; artists cannot resist it. The site has been commemorated with a sign, part of the Art Trail.

Our working hypothesis, in this series, is that it was ice age events that made the landscapes that our famed artists painted. We are arguing that it was the glaciers that created the beauty that they painted and this is certainly true at both North and South Lakes. These basins were carved into the underlying sandstone bedrock by advancing glaciers. These were masses of ice that had risen up out of the Hudson Valley and flowed into the vicinity of the two lakes. To geologists, they are still easily imagined; we certainly “saw” them.

All glaciers are composed of ice and ice is a mineral, just like quartz or feldspar. But it is a very different sort of mineral. It’s silly to think of a quartz glacier advancing across a landscape, but ice can actually perform that nearly miraculous deed. All minerals melt, but ice melts at a very low temperature. That is one of the reasons that it is so dynamic. It does something that you won’t see in other minerals; it moves. At North Lake we see the effect of such movement. All along the eastern shore of the lake we find bedrock that displays the evidence of the motions of the glaciers. The evidence is in the form of westward trending scratches left by the advancing ice. The bottom of the glacier carried large amounts of sand, along with numerous cobbles and boulders. The sand ground and polished the bedrock, and then the cobbles and boulders gouged scratches into it. These scratches are called glacial striations. We see these striations all along the eastern shore of North Lake and also upon the bedrock that separate it from South Lake. If you visit the area, make sure to take a good look at those shoreline rocks; it won’t take you long to see what we have seen. If you have not done this before, you will find it to be quite a revelation. You are looking at the direct evidence of glaciation. The very motions of the ice are manifest before you; it is a marvel. We wonder if Thomas Cole ever noticed this. In 1825 it would have been nearly impossible to have explained these exotic features. Nobody truly understood the Ice Age back then. 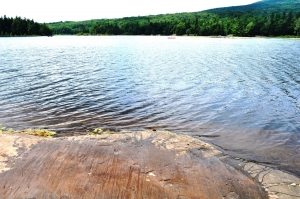 The striations have compass directions and all the ones we see tell us the same thing; the glaciers rose out of the Hudson Valley and flowed westward and then southwestward into the vicinity of the two lakes. It was this advancing front of ice that scooped out these two basins and created the very landscape where Thomas Cole would begin his career.

The story gets better; there is at least some evidence of a colossal glacial collision in the South Lake vicinity. We find glacial striations that tell us of another mass of ice that flowed westward up Kaaterskill Clove and then turned north to cross over the Kaaterskill Falls site. That ice, we think, must have advanced until it collided with the ice coming in across North Lake from the east. What an image this gives us to imagine: two sizable glaciers colliding with each other, It’s Nature’s version of a train wreck. 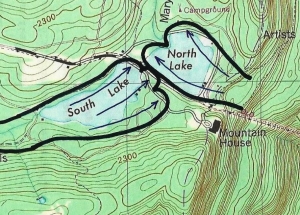 We like to climb up the unmarked trail that runs east and parallel to the shore of South Lake. That trail affords us several locations where we can look down at today’s lake. In our mind’s eyes we can see into the past. Before us, from the northeast and from the southwest, two glaciers advance towards each other and then manifest a slow, grinding collision.

Nobody ever painted that scene.

Note: most of Thomas Cole’s paintings are easily accessed online, including “Lake with Dead Trees.” Reach the authors at randjtitus@prodigy.net Join their facebook page “The Catskill Geologist.”