THE CATSKILL GEOLOGISTS BY ROBERT AND JOHANNA TITUS

Most of our field studies consist of pretty serious science, but sometimes we just like to go out and have some fun. We love to chase down geologies that we find on old postcards. Recently we found a good one. Take a look at our first photo; it’s a post card mailed in 1934. It shows something called “Cow Slip Rock” on Basic Creek at the south end of Hempstead Lane in Greene County’s Freehold. On the postcard, Cow Slip Rock was the big, tilted boulder lying upon four slightly smaller ones. We like big rocks so of went to look for it. We thought there might a good story there and we were right. 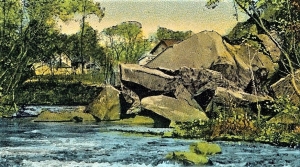 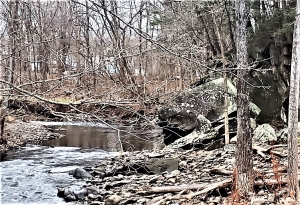 Take a look at our second photo. There it is, Cow Slip Rock at least 87 years later, and things have changed. It is still in the same location and still tilted as it was long ago. But those other boulders are gone. What happened; where did they go? The answer is fairly obvious; there had to have been a terrible storm in the not too distant past. It generated a streamflow that was powerful enough to sweep away those smaller boulders but not strong enough to move the heavier Cow Slip Rock itself. We stood at this site and let our mind’s eyes take over. We soon were able to experience that flood. There was a very heavy rainfall. We knew that the flow of water had risen considerably. It must have overflowed the stream banks, including where we stood, in a full-fledged flood. The two of us were soon up to our necks in the cold flow. We felt raging, foaming, pounding torrents all around us. White caps speeded by. We heard the loud roaring noise of this flood, and that roar was punctuated by the cracking sounds of fast-moving boulders smacking into each other. We looked across the stream and saw Cow Slip Rock quickly dropping down. All those other boulders were being swept away.

It was an incredible moment; perhaps something that only geologists can hope to experience. We had been privileged to witness an important instant in the history of Basic Creek. should have feared for our lives, but we were the mind’s eyes, and nothing can harm the human imagination.

But when did this actually happen? We don’t know; it’s an event lost to time. But our best guess is that this was hurricane Irene in the August of 2011.