The depths of a lake

We geologists make observations and then we make deductions: that’s how our science works. In this light we would like to pick up where we left off the last time. In that last column we claimed that once, maybe about 14,000 years ago, all of Woodstock, extending west to Bearsville, lay at the bottom of a 280-foot-deep ice age lake. It is, logically enough, called Lake Bearsville. It has been recognized by geologists since the middle 1980’s but little research has been done on it. In the great scheme of things, Lake Bearsville is not all that important; it is one of many small lakes that formed at the end of the Ice Age. There are but limited numbers of geologists running around loose in the Hudson Valley and many other geological features are of more compelling significance. But naturally if you live in Woodstock this one is important. So, we have nominated ourselves to do the research and bring to the fore long lost images of the ancient lake. We think people around here should know something of their ice age heritage and this is as good as it gets. 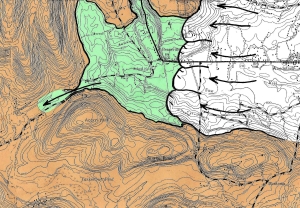 Once we had determined that there had been a lake here and saw the lake bottom in the Bearsville area, we started looking for more evidence. We recognized that the lake had been formed by an icy dam. A glacier to the east, a tongue of the Hudson Valley Glacier, had blocked the flow of water in that direction. The waters of Lake Bearsville had to have escaped through some exit and it should be possible to find that egress. This kind of research is first done on a topographic map. You look at the contours and search out an old escape route for the waters. Our eyes were drawn to the top of County 46. There we saw a notch which seemed just right. 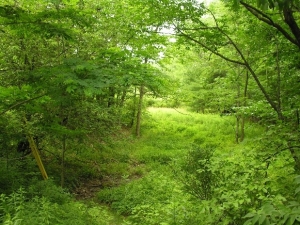 We drove up to this site and saw just exactly what we had expected to see. The notch lies near the very top of Little Beaver Kill. This is a stream which today, drains water off to the west. The notch at the top of the valley is what we geologists call a “paleoform.” It’s a landscape feature that formed in the distant past when things were different. Most streams do not have notches at their tops; they simply peter out. This notch actually used to lead into the Little Beaver Kill. Water rushed through it and on down the kill. Today, the notch is almost entirely dry; you will not see a stream flowing by at all. It looks like a stretch of valley though; we found small cliffs of bedrock which had been carved by the one-time flow of water that passed by here. That’s typical of a paleoform.

This notch is what we call a glacial spillway; it was once actively draining water out of Lake Bearsville. If you visit this site, turn to the east and, in your mind’s eye, gaze off in that direction and see the ice age lake that was once here. All along the shores you are likely to see platforms of ice extending out into the lake. The middle of the lake should be ice free, dark, and very deep. A slow current will be flowing toward you. As it approaches the notch, it is squeezed into the narrows between those two rock cliffs and picks up speed. A quiet but very powerful flow of water rushes past. There is something akin to the hum of electricity, but otherwise it really is silent.

Off to the west, the flow quickly becomes a loud chaos. A raging, foaming cascade makes up this ice age version of the kill as it pounds its way downhill. There is an enormous amount of power to all this; it is the very image of the end of the Ice Age. Glaciers are melting rapidly, hereabouts, and vast amounts of water have to drain off somewhere and they too must do it quickly.

There is nothing unique about this; all throughout the Catskills and Hudson Valley scores of similar ice age streams are, at this very moment, powerful cascades. To be on a hot air balloon, drifting across this landscape, on this day, we would see and hear all of them; it would have been unforgettable.

But none of us was on that balloon, and this image has been forgotten, until today, right here, in this column. It is the job of a geologist to resurrect the past, one chapter at a time and we have done this, our job, for today, except for one thing: we promised to explain how I knew that Lake Woodstock was 280 feet deep. Remember that the floor of the old lake lies, in Bearsville, at and elevation of 600 feet. The spillway lies at 880. You can do the math. Again, as I said the last time, when you travel west on Tinker Street, gaze up those 280 feet and see the icy lake that was once here. Geology has always been a science of discovery and this, we think, is a very good one.