A time park? A Devonian park?

Opus 40, that exotic sculpture executed by Harvey Fite, started out as a piece of art; it may end up being a Saugerties town park. If so, it might be regarded as a “time park” where visitors can travel into the past: 380 million years back to the Devonian age. The original quarry here was cut into a massive Devonian sandstone and that means it cut into a petrified river channel. That’s typical in the Catskills; wherever you see thick sandstones, you can pretty much count on them being the deposits of an ancient river. Such ancient rivers flowed across the world-famous Catskill Delta, the great river delta that deposited all of the sediment that came to be petrified to now make up our mountains.

We visited Opus 40 to explore this ancient time. We found 14 feet of fairly continuous river sandstones. It occurred to us that this must have once been a very big river. It had to have been more than 14 feet deep in order to accommodate all that sand. That’s a lot of river! We were getting interested. This river certainly deserved a name and so we decided to call it the “Opus River.” 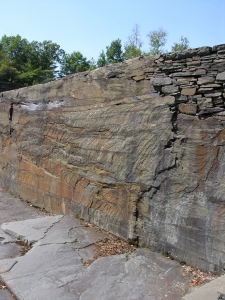 The first four feet of Opus River sediments were made up of flat-lying strata. That is typical of sands deposited well out in the middle of a river’s channel. It suggests a moderate and steady current. We could envision the clear water currents speeding along with a fair amount of sand dancing down the bottom of the channel.

There had once been living creatures in the Opus River. Along the edge of one of Harvey Fite’s walls we found a fascinating fossil. It is not a body fossil, not a bone or shell. Instead, it is something called a trace fossil. This one is a burrow of the animal. We don’t know what kind of animal it was, but worm is a good guess. We found ourselves gazing at the trail of this animal. We were sharing a few minutes in the life of an ancient worm!

There were few other recognizable fossils; We think that the river currents were simply just a little too powerful for most animals. The strength of those currents became manifest when we found more evidence. There were several horizons of what are called ripple marks. These little ripples were the product of river currents passing across the bottom and sculpting the sand. All in all, a lot of evidence of current activity was turning up in the beds of the Opus River. It had certainly been a busy place.

So, by now we knew we were looking at a big and powerful river. That was pretty good, but it would soon get a lot better. Those first four feet of flat-lying strata graded upwards into what is called planar cross bedding. These were strata that displayed a recognizable slope to their strata. That’s unusual; most sedimentary beds are horizontal. These formed as what you might think of as river-bottom dunes. Imagine large masses of sand being swept along by a very powerful flow. The steady current carried the sand along and deposited it on the sloping front of the “dune,” That’s what we were looking at. We are used to seeing planar cross bedding, but we were surprised to see the scale of these deposits; they were big and thick bedded. Once again, we sensed that we were looking at a very deep and powerful river. 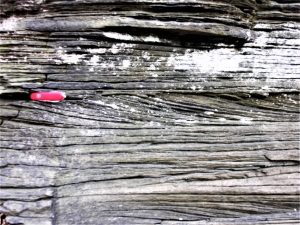 Great rivers are subject to great flood events, and we would find evidence for one of those. We found, on the back wall of the quarry, an erosional surface. This, we suspect, represented moments of the onset of a very big flood. As waters swelled up the banks of the Opus River, the current picked up. Currents cut into the older sediments below and scoured the river bottom. The flood then crested and later its flow abated. As the flood subsided, new deposits of sand filled in the scour surface, hence the feature we were looking at.

This must have been a very substantial flood; we could imagine the raging flow of the river at the peak. We imagined The Woodstock Times with banner headlines screaming about the damage and destruction. But this had been the Devonian time period; there had been no newspapers then. Nobody had recorded these awful floods, and nobody had recalled them until we came along. Geologist read newspapers of stone.

They say that a good sculptor can look into a large stone and see the statue within. We are not sculptors, but we had done exactly that. We had not chiseled an image; we had looked into the rock and seen Nature’s sculpture, already there.

Perhaps it would be better to compare the Opus River to Pompeii, a city frozen in time. Harvey Kite’s river is a petrified stream and, quite precisely like Pompeii, it is frozen in time. Its currents were flowing along and then they stopped in their “tracks” and “froze” into rock. Its ripple marks stopped moving downstream and they have remained in place for 380 million years. Sand grains bounced down the fronts of the river’s dunes, then halted and never moved again, frozen solidly in time. Like citizens of Pompeii, its burrowing animals were caught forever as images in stone. Everything here is frozen in time. That is what sculpture is all about.

Reach the authors at randjtitus@prodigy.net. Join their facebook page at “The Catskill geologist.”