“I heard that crack!”

Being a scientist means that you are going to end up knowing a lot of smart people and I no exceptions to that rule. But we have only ever known a handful of geniuses. One of those is our friend, photographer Vincent Bilotta, who lives in Palenville and works throughout the Catskills. It is hard to define real genius, but you know it when you encounter it. Take a look at some of his photos and you will see.

We had, for years, been trying to take a picture of a geological feature that lies beneath the stone bridge at the top of Plattekill Clove. That’s at a gorge called Devil’s Kitchen, which is one of the most scenic parts of this very scenic clove. It’s dark down there, underneath the bridge, and we just never could get a good picture. Vincent, the genius, not only took a good photo but he produced a great one. He has kindly let me use his image to illustrate today’s column.

The feature we are speaking of is seen left of center in the photo. Take a look and see the structure that looks like a gigantic, petrified bird feather. It’s three or four feet across so don’t worry, no bird produced this. It is what structural geologists, logically enough, call a “plumose structure” and it has quite a story behind it. 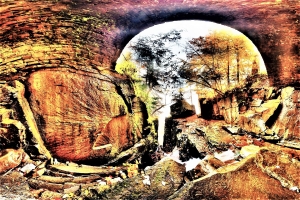 The rock it is seen upon is Devonian in age; it is about 380 million years old. It is sandstone and probably its sand was deposited in the channel of a Devonian river. It hardened into rock and subsequently it became involved in one of the great mountain building events in Earth history. That would be the Acadian Orogeny, an event that produced an early version of the Appalachians, called the Acadian Mountains. The rocks we see here were involved in the uplift. They once lay deep within the bowels of those ancient mountains. There were subjected, back then, to truly intense pressures. The rocks you are looking at were, for a long time, buried under a mile or more of bedrock. Imagine the pressure that produced!

Our rocks were squeezed by all that pressure. It is difficult to imagine rocks being compressed but that really can happen. Typically, rocks have a good deal of “give” to them and they can absorb the stress, pretty well. It is much later that they encounter trouble.

The mountain building event we are talking about involved a great landmass, called Avalonia, colliding with North America. That is where the compression came from. It only got worse, later on, when also Africa collided with North America. Mountain building collisions, however, only last so long. Eventually, what happened is that the collision ended, and, in fact, a breakup of the land masses occurred. Africa drifted back to the east toward where it is today. That released all the pressure that had compressed our rocks.

In this new relaxed state of affairs these rocks began to expand back to their original state. That’s when they became brittle, and that’s when the fracturing occurred. You see, a plumose structure is a special type of crack. Essentially, the fracturing begins at the base of the “feather” and expands away from that point. As the fissuring “ripples” through the rock it creates the plumose pattern. Take a good look at the photo, or better yet, go to the bridge at Devil’s Kitchen and see the real thing. You can easily imagine the fracturing passing through the rock.

This was an exciting moment; things happened fast. Some geologists think that the fracturing occurs at something that approaches the speed of sound! And it must have made a lot of noise too; we would imagine a very loud pop or snap. The surface that the plumose structure is on is a flat, nearly vertical plane. That is another aspect of the fracturing. We call such a fracture plane a joint; it is a special type of crack.

All this amounts to another of those most remarkable features, so often found in the rocks. This was not just a little bit of deformation; this must have been a real earth thumping event. For all practical purposes this is a petrified earthquake. Think about that for a moment. You can actually preserve the evidence of an ancient earthquake in the rocks!