Drumlins Along the Hudson

The Hudson River is curious in at least one respect, it doesn’t have a proper floodplain. Much of the Hudson Valley is flat as a floodplain is supposed to be and you can go and see this. Cross the Kingston-Rhinebeck bridge and drive around north of Red Hook. Take Rt. 9 or 9G and you will cover a lot of flat landscape. But it isn’t a floodplain. Floodplains are supposed to be just barely above the level of the river, but this landscape is elevated far above the river, often about 200 feet up. If that flat surface isn’t a floodplain, it must be something else. It’s the floor of Lake Albany, the great lake that flooded the Hudson Valley after the last glaciation. Lake bottoms are composed of flat-lying masses of silt and clay and that is exactly what you are driving across.

But not all of this landscape is perfectly flat. There are a number of hills in the Hudson Valley. Let’s learn about some of them. Take Rte. 103 North of the Bard College Campus and turn right (east) onto Rte. 79. That road will take you into a cluster of small hills which break the smoothness of the old lake bottom. There are nearly a dozen of them and all of them are elongate in a north-south orientation. Most hills are composed of bedrock, but these are mostly sand and gravel with a fair number of boulders mixed in. Most of them are perceptibly steeper on their north slopes. That gives them the appearance of an upside-down spoon bowl. With so much pattern here, there must be a geological story and, of course, there is. 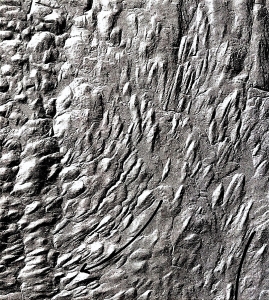 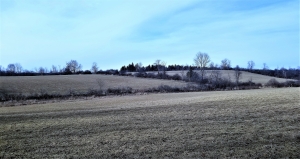 The hills are called “drumlins” and they are a product of the closing phases of the ice age. There are differences in opinion as to exactly how drumlins form. One idea is that the moving ice sculpts glacial sediments that were already there, smoothing heaps of sand and gravel into the sinuous curves we see. A second opinion holds that the advancing glaciers encountered bedrock obstructions and reacted by depositing heaps of sand and gravel. Then those heaps were sculpted into the shapes we see today. In either event the drumlin is apparently produced directly by the moving ice and everybody agrees that they formed at the bottom of passing glaciers. They always tell us which way the ice was moving; the steep slope is always the upstream end. 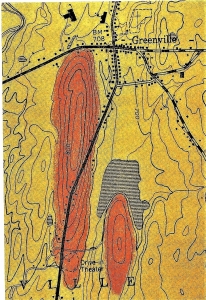 There are never just one or a few drumlins; they come in large numbers, arrayed in drumlin fields. Sometimes there are thousands of them, but in our location, there are only a dozen or so. From Rte. 79 turn left onto Guski Road and head north. Soon you will pass between two fine drumlins. Unfortunately, they are forested, and it is hard to get a good sense of what you are looking at. At 0.9 miles up the road you can turn around and look back at the steep “upstream” end of the western-most of the two. Here, at least, you get a good look at a drumlin. If you continue north on Guski Road you will pass through the valley between two more drumlins and then reach Rte. 78. Drumlins, when they are not covered by trees, are quite striking landscape features to look at. We were hoping to be able to tell you where to get a good look at one, but by the time we reached this point, we were getting discouraged. Luck intervened, however, and we finally did find a good one. Head east on Rte. 78 a half mile and look back. There is a very small drumlin here, but it does have very nice shape and it is not covered with trees.

So how did these drumlins form? The Hudson Valley glacier seems ro have been readvancing across the floor of Lake Albany. Was the lake still filled with ice water at the time? We don’t know. we need to do more field work, but we suspect that the glacier encountered a number of bedrock obstructions here and was forced to dump its load of sediment into the hills we see. We are not exactly sure how these drumlins formed, but maybe it doesn’t matter much; these dozen nondescript hills, none of them more than 200 feet high, have quite a story to tell, if you just know how to read it.

Before you head back home, you might explore the roads a little to the east. Follow Rte. 78 to Rte. 9 and then head south until you return west on Pitcher Lane. Notice all of the flat landscape you are crossing. You are on the bottom of Lake Albany, under about 90 feet of ice water, or at least you would have been at the close of the ice age.