A Reckless Youth Spent at the Artist’s Grotto

Late summer is a hard and stressful time of the year for many of the plants and animals out there. That’s the time when the streams run dry. It’s hot in August and the evaporation rate is high, but also the trees are thirsty, and they have been drawing a very large amount of water out of the ground. The results are predictable, first the soils dry up and then the streams follow. We understand the hardships that a lack of water places on the ecosystems around us, but that’s Nature’s way and Nature is cruel. Fortunately, all creatures have evolved in this setting and they are adapted to all this; they will suffer but they will survive.

It is, however, not such a bad time to be a geologist. We are able to go and see many things that are normally under water. It’s easy, for example, for us to hop around on the dry boulders and work our way up a stream. The channel deposits and the bedrock along the banks of the streams are all well exposed, and that is a real treat for a geologist, and we always try to take advantage of it.

Lot’s of other people too. You will currently see large weekend crowds in some of the bigger Catskill creeks. The people are taking advantage of the remaining swimming holes and they are also simply enjoying the easy hiking. And so it is that this is a very good time of the year to go and visit the lower stretches of Kaaterskill Clove, a location called “Artists Grotto.” We are talking about that part of the stream that lies just between the two Rte. 23A bridges that cross the river just above Palenville and just below Fawn’s Leap. Kaaterskill Clove is a spectacular canyon cut into the Catskill Front, but this part is in many ways the best. The river has literally sliced into the mountains here and cut a deep slash, a canyon within a canyon, and it is so nice to visit now. 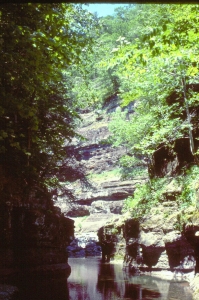 The geological story of this canyon started right after the last glaciation. Back then a great heap of sediment was carried out of the mountains and dumped in this lower stretch of the clove. If you look at that bit of canyon just downstream from the upper bridge, you will see what is left of that sediment. It’s a heap of course grained, very red sediment. There are lots of boulders, cobbles, and gravel mixed in with plenty of red sand. After this material had been deposited, Kaaterskill Creek went to work eroding it away. The river sliced quickly and easily into this soft stuff and began the carving of our pretty little canyon. As the river cut through this sediment, it found that the bedrock beneath was not much harder. These are mostly soft red shales, and they don’t put up much of a fight against any erosive river.

That’s what made the best of our little ravine. The shale is just hard enough to create perfectly vertical cliffs as the river cuts through it. But it is also soft enough to allow for a rapid down cutting erosion. That’s why this part of the canyon is very narrow and very vertical. There are also a few thick sandstones along this stretch, and they affect the landscape very differently. Sandstone is sturdy stuff, and it holds up well against the erosion of the stream waters. The sandstones form big and little waterfalls. Typically, there are good swimming holes associated with the sandstones and so people love these sites. They swim in the pools and then climb on the rocks to bask in the sun.

All this is typical of a stream which has not been around all that long a time and that is the case with Kaaterskill Creek. It’s sometimes referred to as a “youthful stream.” It began to carve its way into the mountain only during the ice age and that is not very long ago maybe only 120,000 years old or so. That makes it a baby among rivers. The Hudson, for example, goes back many tens of millions of years. Unlike Kaaterskill Creek, the old Hudson has outgrown its wild youth. You will find no deep, vertical canyons in the Hudson. There are no waterfalls or even rapids along the older river, it is too mature for such feckless activities.

The two streams provide us with different sorts of natural beauties: Kaaterskill Creek provides us with a special wild and powerful sort of nature, one which the old Hudson River School artists called “sublime.” The Hudson gives a quiet and serene landscape, the old artists might have called it “picturesque.”

Either way, the artists won.