Some Leeds on Where to Find Fossils

On the Rocks The Woodstock Times

The old stone bridge at Leeds must have been something of a marvel when it was completed in 1792. It really is something to look at, a grand old three-span stone bridge. We imagine it must have attracted many visitors during its first century. Mind you, even in 1792 it was nothing new, the Romans were building better bridges thousands of years ago, but in 18th Century upstate New York it must have been one of the biggest and best around. Once there were a number of similar stone-arch bridges; We have seen several of them up in the Mohawk Valley region. Mostly they were a lot smaller and few of them still operate. This one is big; it must have been planned for a long future. It was rebuilt in the 1930’s and easily accommodates modern traffic. It’s very wide and it’s not only used but still very busy. 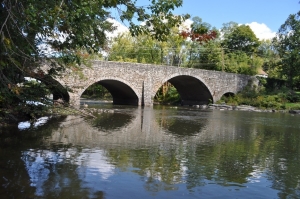 The bridge has been the subject of a lot of post cards and, in fact, that’s where we first became aware of it. Recently we decided to go find it and take a look; it was certainly worth the effort. we didn’t have any trouble finding it; it’s on Rte. 23B right at the western access to the Leeds business district. We parked just beyond the bridge and slowly walked across it. We weren’t too surprised at what we found. In fact, we very much anticipated it.

The men who built these bridges very often took a great deal of pride in their work. They didn’t just want to build bridges, they wanted to create works of art. That is certainly reflected in the beautiful curves of the arches, but it is also reflected in the stone itself. If you go there, take a good look; it is made of limestone, which was a good choice for its density and durability. But it’s more; the stone is rich in fossils.

We had little difficulty recognizing the rock unit; it is the Helderberg Limestone, which is common all up and down the Hudson Valley. We have talked about the Helderberg before; it’s from the early Devonian time period, dating back a little more than 400 million years. It’s a sedimentary rock, first formed as deposits of white or pink sand, not silica sand as we have in the north, but a softer calcium carbonate sand as in Florida. It accumulated in a clear, shallow, aqua, tropical sea. There are many units within the Helderberg and two of them are represented here, they are called the Coeymans and the Becraft Limestones.

The Coeymans makes up most of the bridge’s stone. It’s a thick-bedded limestone which probably means that it was deposited by very agitated water, perhaps wave or current swept. Many animals lived in this rugged but hospitable ecology. They were well-adapted to the rough water in that they had thick, heavy shells, good sturdy protection from being batted about. The most common forms are called brachiopods. These were bivalved shellfish, similar in many ways to clams, but of an entirely different group of animals. Most of the other fossils were crinoids, called sea lilies by their common name. We have written about them several times before, they are colorful and beautiful stemmed animals, each with five delicate lacy arms. Beyond that we found a number of other forms, including trilobites, corals, bryozoans and others.

The second unit, the Becraft Limestone, has a fair amount of the mineral hematite in it, and that gives the unit a distinctive red hue. It was also very fossiliferous and the most abundant forms here were remarkably large crinoids. It’s red hue and abundant fossils made this a popular stone, not just for bridges, but, more often, for 19th Century “marble” table tops.

As we said, we saw the handiwork of an able craftsman at work here. This would not just be a functional bridge, but a pleasing and interesting bridge. We have seen a lot of Helderberg Limestone and, while it is a very fossiliferous unit of rock, it is rarely as nice as this. Our bridge maker spent a lot of time looking for and selecting the best slabs. Look, especially, at the capstone that makes up the sidewalk walls east of the bridge and on the bridge itself.

As geologists, we are used to reading and hearing messages from the rocks. Usually, they are sent across hundreds of millions of years and the messages come from ancient ecologies and their long-dead plants and animals. This is one of the few times we have gotten a message from a man of the past. we wonder who he was.