We always like to say that there is a spiritual heart to the Catskill Mountains and that heart is a field called Pine Orchard, lying atop the Catskill Front near North-South Lake Campground. There is a fine ledge of sandstone there and it offers a 75-mile sweeping view of the Hudson Valley. Not surprisingly it became the site of a hotel and that was the famous Catskill Mountain House, first opened in 1824. We frequently find ourselves visiting and we like to sit upon that ledge and gaze into the valley below. Behind us is the image of the old hotel, crowded with its many guests. Back in the 19th Century anyone who was anyone stayed in the hotel. Three presidents visited along the most prominent businessmen, industrialists, artists, writers and so many other celebrities of those times. Now the hotel is gone, but its presence can still be felt here; it was an important place; it still is. 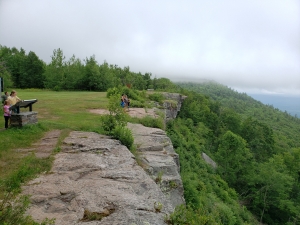 We put our hands upon that sandstone bedrock; it is important too. Human history fills the empty space above the ground but everything below the surface is geological history, and that’s all ours. We can touch it and we can see it. There are miles of sedimentary rock beneath the surface right here and that is a lot of history. That sandstone ledge, for example, is a petrified river deposit. Those sandstones were once sands and they filled a sizable river channel, flowing from out of New England and into the west.

That river flowed across something called the Catskill Delta. It’s an ancient bit of history, well-known and perhaps even well-loved by geologists, and it conjures up quite a story. We look east and see the profile of a rising mountain range out there. Those are the Acadian Mountains and we are looking about 380 million years into the past. Those mountains are in their prime and are very actively rising. They are also actively weathering. Chemical processes are destroying the bedrock of those mountains, turning it into sediment, mostly sand, which is traveling down mountain streams. Where those streams are entering the Catskill Sea, which lies west of the mountains, they are depositing the Catskill Delta.

And, at the Mountain House site, we are sitting in the middle of just one of those streams. It’s not unusual for hundreds of them to make up a large delta complex. But suddenly we realize something important about this river: in its day, it must have been lying exactly at sea level. Such deltas always form at sea level. We, again, gaze into the valley below. The Hudson River flows at today’s sea level and that lies about 2,200 feet below us. Suddenly we have an “aha” moment. This ancient river had once flowed by at a level 2,200 feet lower than where it is today. It has been uplifted all that much. There has to be a story here, a story of tectonic uplift. Let’s continue with this next week.

Contact the authors at randjtitus@prodiy.net. Join their facebook page “The Catskill Geologist.”  Read their blogs at “thecatskillgeologists.com.”