Your most Godawful geology
The Catskill Geologists
Robert and Johanna Titus
The Columbia Paper, January 2020

We haven’t properly introduced ourselves, have we? We are Robert and Johanna Titus. We will, from time to time, be writing for The Columbia Paper. One of us, Robert, has worked with editor Parry Teasdale off and on since 1996 and now we are going to resume. We call ourselves “The Catskill Geologists” and that is because we work for a number of newspapers and magazines across the river from you
So, if we are the “Catskill Geologists,” then why are we writing in Columbia County? Good question, and we have been wondering about that ourselves. You see, you folks have some of the most Godawfully difficult geology anywhere that we know of – perhaps just anywhere at all. Take a look at the map we include here. It is the Columbia County part of the New York State Museum’s geological map. Its production was a big event back in the 70’s. That was supervised by then State Museum geologist and our friend, the late Dr. Don Fisher. Maybe you knew Don; after retiring from the museum he opened up a rock and mineral shop in Kinderhook.
Don’s map shows the distribution of the major rock units that make up the bedrock here in Columbia County. If you can’t make sense of the map, don’t worry about it; we just want you to see how difficult it is. One unit, in gray, stretches through the middle of the map from the south center of the county and then on toward the northeast. That’s the Elisaville Formation which is mostly a black shale. You can see outcroppings of it exposed along the Taconic Parkway in the southern part of the county. Look around the map; there are a lot of other rock formations, aren’t there? Each records a moment in geological time. And they all seem to make up a very complex jumble. That’s the Godawful part of all this. 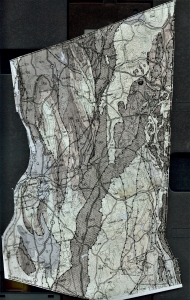 How on Earth did all this come about? Well, we think we know – sort of. We read about this in Don Fisher’s book “The Rise and Fall of the Taconic Mountains,” which was published in 2006 by Black Dome Press. Don’s book recounts the geological history of the county and it is broken up into a number of chapters defined by their plate tectonics. Each tectonic event witnessed North America colliding with another tectonic plate, one was a collision with Africa, two others involved Europe. Columbia County was in the heart of all this. Each collision saw the rise of mountain ranges, here and in western New England. Sediments, eroding off of those new mountains, would be the makings of each new rock unit. All of the county’s rocks, both new and old, were compressed, folded, fractured and metamorphosed in the heat of the collisions. Does this sound Godawful? It is, and that’s what you see on the map, perhaps all you can see!
It only gets worse; hundreds of millions of years later came the Ice Age. Glaciers, thousands of feet thick, flowed down the Hudson Valley and swept across the rest of the continent. You can imagine the complexity of the geology left behind by that event? The two of us don’t have to imagine it; we have seen it and worked with its geology.
Our job at the Columbia Paper will be to explain all his in a fashion that can be understood by you, the average general reader. We think we can do that; we look forward to it.