Erratic Behavior
On the Rocks
The Woodstock Times, 1997
Updated by Robert and Johanna Titus

North Lake Campground has always been a wonderful place to visit at any time of the year, but autumn is a special time. We never need too many excuses to make the trip. We almost always start out at the parking lot at North Lake itself, then we take the trail south along the shore of the lake. The trail will take you out to the point of rock that separates North and South Lakes. Travel around the point and in another quarter mile or so you will encounter a most remarkable boulder. It is enormous, it must be twenty-five feet or more across and perhaps eight feet high. That’s a lot of rock, but that’s not all. 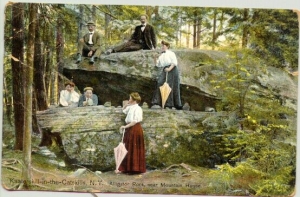 A rock that big deserves a name and this one is called “Alligator rock.” We are not convinced that was a good choice, how about dinosaur rock? Nope, that name has already been taken for an equally large boulder about 50 yards away. But we don’t get to change names anyway: Alligator rock it is. 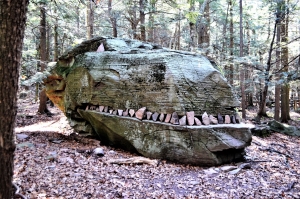 A person is entitled to ask where a boulder this large came from. It’s a good question and there is an answer. Boulder rock is what geologists called a glacial erratic. About 15,000 years ago all of North Lake was buried under a large glacier, a sheet of ice that was flowing southward down the Hudson Valley.
Moving ice is good at two special things. First it is very good at ripping up large blocks of rock and second it is even better at carrying those blocks of rock away. You have to use your imagination to get a fix on all this. Travel back to the Catskill Mountain House ledge and gaze at the horizon to the north. You have to be able to see ice coming down the valley and slowly filling the Hudson. Then it rises up the highest slopes of the valley wall right beneath us. Soon ice is coming over the ledge just to the north. The ledge is soon overwhelmed by the moving ice. As the glacier shears across those barriers of rock it adheres to the rock and plucks loose many large boulders.
Nobody can actually see such a thing. You really do need a good imagination to imagine all this. In real ice age life such events go on in the darkness at the bottom of a glacier. But we understand that the bottom of every moving glacier is replete with many such boulders. Some of them are a lot bigger than Boulder rock. Some are truly the size of houses. Neither Alligator nor Dinosaur Rocks are that large, but they are big enough.