The Devonian of Greene County
Part 3: The Coeymans Limestone
The Greenville Press March 3, 2005
Updated by Robert and Johanna Titus

The two of us once had dinner at the “Seven Seas Restaurant” at Walt Disney World in Florida. It’s quite the experience. If you get a good table, you are right up against the window of one of the world’s largest aquariums. It’s enormous, and they don’t keep just goldfish in there either. There are full size sharks and an abundance of other large, colorful tropical fish. There is even a small living coral reef. Of course, it’s not that the corals actually do anything, but they add a great deal of color to the experience.
You might think that you can’t have dinner at a place like that here in Green County, but you would be wrong – sort of. All you really need is a good imagination and a little bit of knowledge. We can provide the knowledge.
In recent issues of the Press we have been surveying the geology of the Devonian time period, here in Greene County, and so far, the emphasis has been on the Helderberg Sea. That was the shallow tropical sea that once covered our entire county. We have gone and visited outcrops of the Rondout and Manlius Limestones but now it’s time to visit what may be the most interesting of all the local Devonian rock units. It’s called the Coeymans Limestone and it’s named after the town. The Coeymans is composed of thick bedded, very fossiliferous limestone and it is often a good thick unit of rock.
You can go and visit it yourself. Take Rte. 81 east from Greenville until you come to the Quarry Restaurant (yes that’s where you can have dinner next to an imaginary aquarium). Just east of the Quarry, on both sides of the highway, are large outcrops. The upper two-thirds on both sides are exposures of the Coeymans.
If you pull over and take a good look you will see just what we promised. The limestone comes in solid thick layers (strata). From any distance it is pretty dull looking stuff, but if you get really close you will see a lot more. You should be able to pick out the crescent shaped cross sections of fossil shellfish. These are bivalved invertebrates. That means they had two shells, just as a clam does. They just weren’t clams; they belong to a very different group called brachiopods. This one is named “Gypidula coeymanensis.”
With a little patience you should be able to find something a little more recognizable than a cross section. Some of these fossil brachiopods are actually pretty good specimens. Sadly, I don’t think you will have much luck trying to collect any of them; this is very solid rock and it will only give up its fossils grudgingly. Anyway, the outcrop makes a fine outdoor museum just as it is. 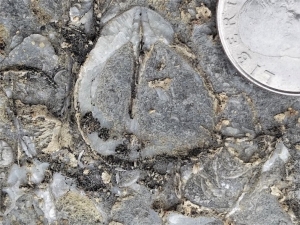 You will also likely find a number of what look like fossil Cheerios or fossil Life Savers. These are the circular remains of what are called “sea lilies.” They were distant cousins of the starfish. Imagine a five-armed creature stacked atop a long stem-like structure. In life the small Cheerios were stacked together to make up parts of the stem. 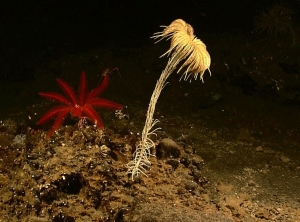 All in all, we can conjure up an image of a colorful tropical seafloor here. Imagine pink sands, with some green algae, then add the sea lilies and brachiopods and you have a pretty good marine ecology.
All this gets us back to having dinner with the view of a tropical sea. The Coeymans Limestone once passed right through the site of the Quarry Restaurant. Of course, the limestones long ago eroded away right where the Quarry is, but they were there. And so was that ancient Devonian sea.
What we are saying here is that the very space now occupied by the dining rooms at the Quarry was once shallow tropical sea. Back then this was just as good as, and probably better than, anything you can see at Walt Disney World!
That’s quite a claim, but it all gets even better when you spend a little time looking around. We found a couple of very interesting boulders of the Coeymans nearby at the intersection of County Rtes. 26 and 81. One of those displayed the cross sections of several of those thick limestone layers that typify the Coeymans. But these were special. They each displayed a foot or so of limestone. At the bottom of each horizon was a litter of broken fossil shells. This coarse-grained litter graded upwards into finer-grained limestone. What we were looking at were two storm deposits. Way back in the Devonian, two awful storms, perhaps even hurricanes, swept across Greene County. Each event stirred up the sediment of the seafloor. As the storms passed, the coarse-grained shell fragments settled back onto the seafloor first and then the sand sized particles followed. Geologists call such strata “graded beds.”
So now, when you are sitting and having dinner at the Quarry, you can imagine the raging currents of a passing hurricane swirling all around you. How’s that for an appetizer? But it gets better.
That second boulder really caught our eyes. It displayed several small fossil coral heads. These fossils gave the appearance of honeycombs; they were composed of numerous small hexagonal chambers. That’s what a coral head is supposed to look like. In life, each chamber possessed the soft anatomy of an individual coral animal. This cold gray boulder was, in short, a part of an old coral reef.
This was a pretty good-sized boulder and we have little doubt that it was originally from a site very close by. Once again, you look at the evidence and you begin to realize that things used to be very different around here. Try to imagine a coral reef all around you while dining at the Quarry. These are colorful habitats and rich with living creatures. Few of them would look very familiar. We suspect there were a lot of fish here, but we don’t think you would recognize any of these ancient ancestral fish. We are guessing that these fish would have been a lot slower and clumsier than the ones that typify a reef today.
But they were marine fish, and they did live right here. So too did those corals. Our outcrops on Rte. 81 near the Quarry are a gateway to a distant past. This was Greene County at the time of the Coeymans Limestone. Wave your arms through the space around you and realize that you are sharing space with an ancient marine ecology; you just cannot share its time.
Contact the authors at randjtitus@prodigy.net. Join their facebook page “the Catskill Geologist.