Plattekill Clove is one of those out of the way Catskill canyons. The land is mostly open to the public now and there are few private residences. Take the West Saugerties Road to West Saugerties itself. Turn left onto Platte Clove Road which is also Rte. 16. This is the one road that ascends the clove. It is a narrow one and it isn’t open in the winter. Even in the warm months, however, you can hike up the road and not worry about too much traffic bothering you. There are several nice scenic viewpoints along the way and it’s well worth the effort to get to know this lovely location.
To us, it is the top of the clove that is most interesting. There is a remarkable stream pattern to be seen there. Plattekill Creek forms itself up there. Several small tributary streams descend the slopes of the eastern Catskills and combine to create the creek. None of them is of particular note, they’re just run-of-the-mill mountain streams. But even if these streams are of little note, what happens to them is
. 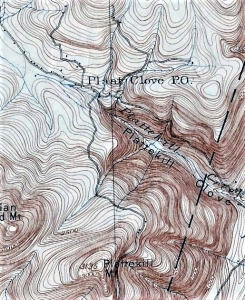 Plattekill Creek is a young stream. It probably dates back no further than the ice age. Before the glaciers flowed down the Hudson Valley there probably was no Plattekill Creek. But when the ice came it seems to have sheared off the eastern ledges of rock and created the great, steep “Wall of Manitou” that towers above the Hudson. The steep slope was, quite naturally enough, attacked by newly formed streams. Rivers flow rapidly down steep slopes and they cut deeply into them. That’s what produces cloves such as the Plattekill.
The best part of the clove is near its top, a location known as the “Devil’s Kitchen.” The Catskill Center for Conservation and Development has acquired much of the land here, and the public is welcome to visit this site. The center owns a tiny red cabin at the top of the clove. Those two streams we mentioned reach a confluence just above the cabin. The confluence is of no particular note, but just downstream the combined flow drops off a fine waterfall. Here the erosion of Plattekill Creek has reached up into the mountain and cut the falls. 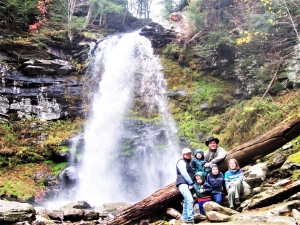 To see the waterfall, you can follow the trail that starts next to the cabin and descends a short distance down the clove, curves back and brings you to the base of the falls. From the base of the falls you can turn around and look down the valley. This is real good youthful stream morphology. The canyon is narrow and deep. It is the product of very rapid and very recent erosion. The Catskill Center welcomes you, but they would like it very much if you would stay on the marked trail.
A quarter mile farther down the road another small mountain stream descends from the north and enters the Plattekill Creek. This erosive stream has been a very active itself. It has cut the most remarkably narrow and deep chasm into the bedrock. The work “defile” is sometimes used for a landscape feature of this sort, and it’s just the right word. This cut in the slopes is on private property, but you will have no trouble seeing it from the side of the road. 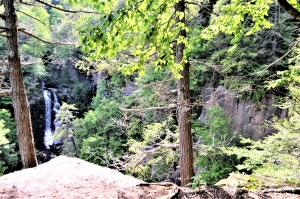 The falls at the upper Plattekill Clove is one of the most graphic demonstrations of the erosive power of a mountain stream that we know of in the area. This kind of creek devotes itself to what is called downcutting. Erosion is focused on the removal of rock beneath the stream bed. Virtually no widening of the valley has yet occurred. It is the earliest stage in the development of a mountain creek’s valley. The flow of water exploits the fracture patterns that are here and removes blocks of rock from between the fractures, one at a time. Eventually the defile is produced. Spring is the time of the year to see this process in action. The Devil’s Kitchen won’t last for long (in terms of geological time), a couple of hundred centuries pass by and bingo – the canyon is gone! So, enjoy it now, while you still can.
Contact the authors at randjtitus@prodigy.net. Join their facebook page “The Catskill Geologist.”