I found a rock! Part one.

Many years ago, a colleague of ours in the Hartwick College English Department expressed surprise that we could be a geology columnists. We will never forget what he said: “There is no end to what someone can write about Shakespeare, but what can you ever say about a rock?” Well, if you have been reading Windows Through Time long enough then you know what we “can write about a rock.” The answer is a lot of things. Still, we have been waiting to find just the right rock, and we think it has turned up. A few weeks ago we were doing our last yard work of the season. There, just beyond the edge of the grass, we picked up an interesting looking rock. It was a cobble, a little bigger than a very large potato. It was banded with horizons of light and dark minerals, a type of rock called gneiss. That is a rock which has spent a lot of deep within the earth’s crust. During its burial it was “cooked,” heated up to very high temperatures and subjected to enormous pressures. We are amateurs when it comes to such rocks, but we could recognize that the light banding was probably the minerals quartz and feldspar while the dark bands were probably amphibole and or pyroxene. We saw some crystals of garnet in there too. All this mineralogy had originated during the time the rock had been cooking. Geologists call this metamorphism of a rock. There was also a pair of broad light colored horizons at one end. They lay parallel to all that other banding. The single most interesting thing about it was that it simply did not come from around our Catskills. It was not a native rock; it was an exotic, alien sort of rock. It came from far away. But from where and how did it get here? 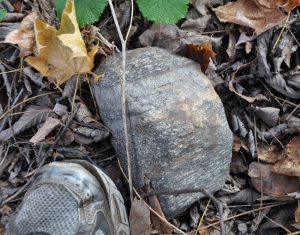 We knew that it had been dragged onto our property by a glacier, probably about 15,000 years ago. It is something we call a glacial erratic: it simply does not match the local rocks or belong in the local stratigraphy. It was carried to where we found it by a slowly moving glacier. After the ice melted away, it was left behind, waiting many thousands of years for us to find it. Now we had and wer wanted to write a column about it. We needed help.

We brought my gneiss to a Hartwick College colleague Dr. Eric Johnson. Eric has spent his career studying rocks such as these throughout New England. We wondered what he could tell me. Eric liked the rock and pronounced it to be something called a tectonite. That is a rock which had long been involved in a lot of crustal (tectonic) activities. It was an old rock which had experienced a lot of mountain building events, and all the volcanic eruptions and earthquakes that come with them.

He agreed that it was a metamorphic rock but had a lot more to say. One thing that impressed us was that he was sure that this rock had once lain miles beneath the peaks of some ancient mountain range. We asked him if he could tell me where it had come from. He couldn’t be sure, but guessed that our gneiss had once been part of the Green Mountains of today’s Vermont, coming from the deep innards of taller and very ancient versions of those mountains. It was then that the rock had come to be metamorphosed.

But there was more. Those two light colored horizons had been volcanic intrusions. The Green Mountains, way back when, had been volcanically active and injections of molten rock had penetrated the older gneisses.

We was intrigued by the history that was emerging. When had all this happened? Eric thought that had been more than a billion years ago. That was when a great mountain building event had occurred in an early version of North America. Our continent was then called Laurentia and it was colliding with other landmasses. Such collisions have occurred throughout geological time and each results in a mountain range; this one was called the Grenville mountain building event.

This was just a single humble rock. Bit what a story it had to tell! It had been caught up in the core of a rising mountain range when two land masses had collided. It had been cooked by the heat of the deep crust and penetrated by volcanic intrusions.  Over the course of millions of years it had grown the crystals that it now displayed. It was a very venerable rock. Is that what you can say about a rock? It’s a start. To be continued. Contact the authors at randjtitus@prodigy.net. Join their facebook page “The Catskill Geologist.”