Looking at Time in winter: Part One

Modified by Robert and JohanneTitus

Winter is not always the best season to be a geologist. We do greatly prefer the warm months when we are better able to get out and explore. But there are some compensations. This is the season when, with all the leaves down, we can see so much that will be hidden come next summer. We have in mind a good look at the great Wall of Manitou, the Catskill Front. From numerous sites down in the Hudson Valley you can gaze up at this massive wall of sandstone and shale and see details that are usually hidden. 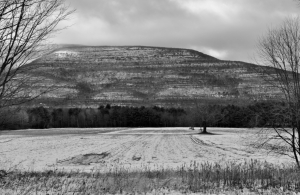 We stopped along the road down in Palenville and did exactly that, and we were soon able to wax poetic about one of our favorite topics in geology. That would be the enormous lengths of time that we see recorded in the strata. We geologists routinely travel back hundreds of millions years into “deep time.” Much of our own work involves Devonian age rocks which are mostly a bit less than 400 million years old. Much of the rest of our work takes us to ice age deposits which are a mere 15 to 20 thousand years old. We geologists get to be a little jaded with all this. What’s a couple of hundred million years in a universe that is more than 14 billion years old? Still, sometimes it is nice just to go and “look” at all that time. That’s what we did in Palenville.

If you get the chance, please do the same. Follow Rt. 32 and pull over someplace where you can get a good view of the Catskill Front. We picked just south of the intersection with Rt. 32B. Gaze up at wall of rock and really appreciate what is before you. There are about 2,000 feet of stratified rock up there and all of it was, originally, sediment. The strata that you can see clearly are layers of sandstone; they make up those many horizontal strata. That’s sturdy stuff and it has held up well in the face of eons of weathering and erosion.

What you can’t see is what lies in between the sandstone ledges. That would be mostly red shale. Shale was mud to begin with and that makes it pretty soft stuff. Nature has little trouble with shale; she likes to erode it away and she is good at that, turning it into soil. So you rarely get to see shale in steep slopes like this. They are there, but they are buried in their own soils.

So, we have a pattern here. There appear to be countless horizons of sandstone, interbedded with equally countless horizons of shale. All were once soft sediments. Layers of sand alternated with layers of mud. And there before us are about 2,000 feet of all this, all deposited one stratum at a time. How long did it take? Well, that’s our main point today: it took a very long length of time!

For all of those millions of years our region witnessed the steady accumulation of layers of sand and layers of mud. Many of these sediments are red and that indicates that they were terrestrial in origin. The red is the mineral hematite and that forms only on land. The sands accumulated in stream channels; the mud of the shale formed on floodplains. This was a great delta, called the Catskill Delta.

You stand along the road, you gaze up, and you are looking at the cross section of something akin to the Mississippi Delta. Imagine if some enormous creature could slice 2,000 feet into the southern reaches of the Mississippi delta. If that giant then peeled away the earth, it would expose a cross section of the sediments of that delta. Those sediments are probably all still soft; they have not yet hardened into rock. But, in every other respect, our slice of Louisiana would look exactly like what we see here.

We spoke of waxing poetic before, and we guess that a person can actually get that way when he contemplates such thoughts. We could have spoken of waxing philosophical and that might be appropriate. We geologists do find all of this very spiritual and maybe that is the best word of all. Reach the authors at randjtitus@prodigy.net. Join their facebook page “The Catskill Geologist.”