The Glaciers of Overlook

Mountaintops develop over millions of years and they show all the scars of those great lengths of time. If you know what to look for, you can read a lot of the history that those scars record. Such is certainly the case with Overlook Mountain. The mountain is virtually a history book, recording the events of the great glaciations that once buried the Woodstock area in thousands of feet of ice.

Overlook has long been a popular goal for day hikers. The final stretch of trail leads to the old fire tower at the mountain’s summit. As you round the last turn and approach the tower you will find considerable bedrock at your feet and that is where the story begins. Bedrock is common on the mountain but here it is different; it has a polished look. Also there are long straight gouges, called glacial striations, on its surface. These are the unmistakable signs of the great ice sheet that once covered Overlook. 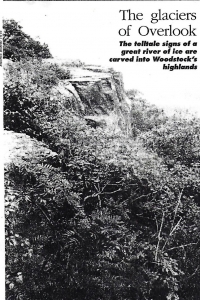 Glaciers move slowly, but they do move. A great thick glacier, as it passes across a knob of rock, will act like a sheet of sandpaper; it will grind the rock down. The bottom of the glacier is dirty with sand, gravel, cobbles and boulders. The sand causes the polishing. The last few cobbles to be dragged across the rock leave the striations. Hence, the features at the top of Overlook.

The fire tower site thus conjures up quite an image. This location is more than 3,100 feet above sea level and more than 2,500 feet above the floor of the Hudson Valley. The glacier must have been a half mile thick  . . . or more. This is known to science as the Woodfordian advance of the Wisconsin glaciation of about 23,000 years ago. With the possible exception of Slide Mountain, it seems likely that all the Catskill Mountains were covered by the Wisconsin ice sheet. The Catskills then resembled Antarctica or Greenland of today.

We can read the nature of the ice’s movement. There is a compass direction to the striations, a little west of south. The ice sheet must have been relatively thin at first. It seems to have been channeled southward down the Hudson Valley. Then, as it thickened, it swelled up out of the valley and flowed southwest across Overlook Mountain.

The fire tower site is only the first stop in an exploration of the Overlook glaciation. From the fire tower, head east to the ledge which looms over the Hudson Valley with Lewis Hollow immediately below. The site was a popular one during the hotel days. The drop-off is an impressive one and this is a fine example of sheer cliff. The cliff faces a little west of south. And so it is oriented with flow of the ice. That betrays its glacial origins.

The cliff is an example of what is called “glacial plucking.” Ice tends to stick to rock, and so as the ice passed across the south end of the Mountain, this adherence caused it to yank or pluck loose large mases of rock. After enough of this plucking a cliff developed.

You will find the occasional boulder on top of Overlook; I found an especially large one right on the brink of the cliff. These are called glacial erratics. They had been plucked off somewhere to the north and dragged south to this site. They were left behind when the ice melted. Once there were probably a lot more erratics near the edge of the cliff. Alf Evers, in his history of the Catskills, records that all the smaller ones were, long ago, pushed over the edge. The sport was called “boulder rolling.” 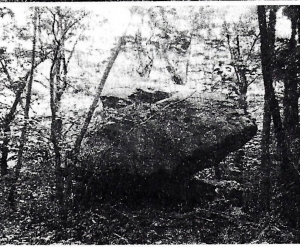 Still, there are a lot of erratics on Overlook – away from the cliff. Take the trail back down the hill. To the right, just past the ruins of the old Overlook Mountain House Hotel, is another plucked ledge. Below it the woods are littered with an abundance of erratics. There is no cliff here to push them over.

Before leaving Overlook it is worth returning to the ledge. Gaze out into the valley and with your mind’s eye you can visualize the time when it was filled with a stream of ice flowing south. The ice gleamed white with an abundance of dark blue curved crevasses. Its tide slowly rose up the valley walls and eventually overtopped the mountain. All the Catskills were soon a vast Arctic wasteland. It’s quite a scene to imagine, a scene now only recorded in the rooks.