This column likes to get you out and take you to places you have not been before. Summer is coming up and it is nice to wander about and maybe learn a little geology along the way. How about Conesville in Schoharie County? How many of you have been there? It’s a very rural little village in the heart of the Catskills. It’s just east of Gilboa; does that help? The main highway of Conesville is Potter Mountain Road and that takes you down the valley of the Manor Kill which is a tributary of the Schoharie Creek. The area is a bit of a backwater today, but it seems to have had a more prominent past.

The road must have once been of some importance. You pass the ancient Richtmyer Tavern which, although long closed, looks like it was once a busy hostelry along a busy highway. There’s not much traffic today. This was once farmland and probably pretty good farming occurred here. Nowadays you will see some cattle but not much more. Maybe this is no cosmopolitan center, but there is a lot of past here, and I was eager to explore it, not the historic past, the deep past of its geology. 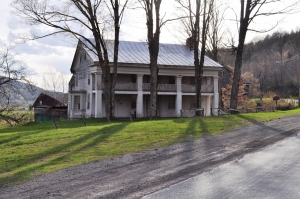 I commonly enter the valley from the east. When I saw it for the first time, I recognized it for what it is – geologically – the bottom of an Ice Age lake. If you drive the road and pay heed to the valley you will see how flat and wide it all is. That’s typical of any lake bottom; they mostly tend to be very flat. Lake sediments pile up as strata of flat sheets of clay and silt, hence the flat bottom. 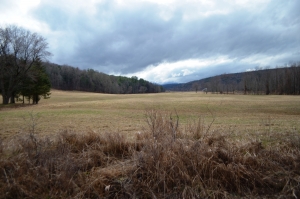 Floor of Lake Conesville – from east end of lake.

It’s the size that impresses you the most; this was a big lake: about two miles long and a half mile across. There is a gentle slope to the west. That is towards the lake’s old outlet which, in turn, led toward the Schoharie Creek Valley.

If you travel down the valley about two miles to the west, you will suddenly see that things change. The valley walls close in and the broad open expanse of the valley disappears. Here the Manor Kill becomes confined to what is almost a canyon. Small hills crowd in on both sides. We have reached the end of the old lake.

I slowed down along this stretch of the road; I was curious to understand what was here. My best judgment was that this is an old Ice Age moraine. I had better explain what that is. A moraine is a heap of coarse earth that was mostly bulldozed in place by an advancing glacier. I was guessing that once, long ago, coming from the Schoharie Valley and heading to the ea st, there had been a sizable valley glacier. It advanced along this part of the Manor Kill and then came to a halt. At this moment it left behind that heap of earth. Such a glacier shoves enormous amounts of earth before it. Even more sediment is carried within the ice, and that contributes to the total. The result is the moraine, a big mass of very heterogeneous sediment, clogging the whole of the valley.

The moraine made up an earthen dam which accounts for the presence of this lake. That blocked the valley here and water backed up east of it to form the lake. I looked at all this and then turned around to look back to the east. In my mind’s eye I could see the old lake. I had picked a quiet overcast day, roughly 14,000 years ago. The lake waters were still, dark, and black. All along the shores there were shelves of ice sticking out, but the middle was clear water. It was unbelievably silent all around me; this was a nearly lifeless world. It was still, after all, the Ice Age. But, in the far distance, back the lake’s full two miles, I could hear a powerful current flowing into the lake.

The current flowed through the lake, reaching out to its western end. Now I turned around again and looked west. That current was pouring through the canyon, creating a very loud, even violent torrent. It was this rush of water that had eroded the canyon. Time speeded up for me and that canyon was being cut down deeper and deeper. Gradually it came to be lowered until the dam was gone. All the water of the lake slowly and gradually drained out of it. The now dry lake bottom began to take on its modern form. It began to resemble the valley I had known. Now I truly understood what I was looking at.

Contact the author at titusr@hartwick.edu or visit his facebook page, “The Catskill Geologist.” Robert and Johanna Titus are now writing columns for The Mountain Eagle.