Last week we drove along Rt. 32, pulled over to the side of the road and gazed up at the Catskill Front. We found that, at this time of the year, we could look through the leafless forests and see the rocks so clearly. We became philosophers as we contemplated the millions of years of geological history rising before us.

Many of us learned a lot of geology when Hurricane Katrina struck. One of the most remarkable things was that most of New Orleans currently lies below sea level. How could that be? Were people idiots when the city was first founded? Of course not! Three centuries ago, when New Orleans was settled, it lay above sea level. During those centuries it has slowly sunk until now most of it is below sea level. It would have been flooded decades ago except for the construction of manmade levees.

Ironically, the levees may have caused more damage than they were worth. Obviously they weren’t up to the job when the hurricane struck; the city flooded anyway. But there was something else equally important. Floods bring sand down the river and deposit it, spread out across the delta top. That can’t happen if levees get in the way. New Orleans, being surrounded by levees, did not frequently experience flooding, but the city never received the sand that floods would have brought. The city continued to subside, but the sand, which would have kept it above sea level, never got there. That’s an irony!

My point here is that great deltas slowly subside under the weight of their own sediments. As thousands and then millions of years pass by, enormous thicknesses of sand and mud accumulate on them: first hundreds of feet and then thousands. That’s what we are looking at when we gaze up at the Catskill Front. Had there been a city of “Old Orleans” on the Catskill Delta, back during the Devonian time period, then this fossil city would still be up there – somewhere along the Catskill Front.  And it would likely be buried beneath many feet of sedimentary rock. What a strange thought!

But, this is science, and that is where the evidence leads us. When I look up there and see all those ledges of sand, I realize that these are the deposits of great flooding rivers. I see countless cities of Old Orleans and I see countless Hurricane Katrina’s. I go back into time and watch as the old Catskill Delta slowly subsides, and I see all that sediment piling up. Eventually all of these strata sink into the depths. Thousands of feet of new sediments bury the old. The weight of all this is stupendous. And given still more time, and a lot of it, these sediments begin to harden into rock.

Eons of time are now flying by in my mind’s eye and I am nowhere near the end of it. I still have to contemplate the erosion of the Catskill Front to create the wall of rock we see here. Only Nature can do that through the weathering of rock, turning it back into sediment and then the erosion of that sediment. Nature must be very patient. But for a person to stand along the side of the road, to look at the strata above, and see all this is a marvel. These are awesome notions; no wonder a geologist becomes philosophical.

But where did all that sand and mud come from? Now I must stop looking west at that ancient delta and I turn around to look to the eastern horizon. There, in front of me, is the ghostly silhouette of a long lost mountain range. It rises above today’s Taconic Mountains and it dwarfs those puny peaks. The sediments and the sedimentary rocks of the Catskills came from the weathering and erosion of that towering range of mountains, called the Acadians. These may have risen to elevations of about 30,000 feet. I instinctively look up, but they are not there . . . anymore. 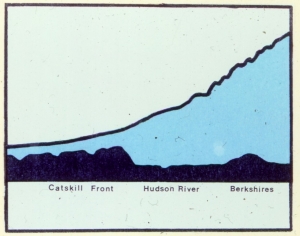 Profile of Acadian Mountains against profile of modern Catskills, Hudson Valley and Taconics

I look east to west, then west to east. I see 30,000 feet of old mountains (east) having been converted into about 9,000 feet of modern Catskills (west). Old mountains were turned into new mountains. And Nature presents us with a cycle here. That conversion of old mountains to younger mountains will all probably happen again – and then again. It was the English naturalist James Hutton who first understood things such as this. He marveled about time, saying “We see no vestige of a beginning, no prospect of an end.” With his thoughts geology became a philosophical science. Reach the author at titusr@hartwick.edu  Find more at the facebook page “The Catskill Geologist.”